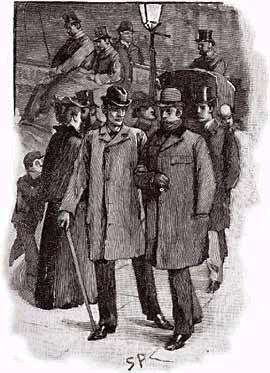 When one visits London, you will find that there are a number of Sherlock Holmes walking tours available,  either programmed or self-guided. We chronicled a number of those back in May 2006 in a post titled Sherlock Holmes Tours of London, including the famous Original London Walks.

Now we understand that there is a new bus tour available for those who seek to walk - er, ride - in the footsteps of the great detective. From their press release:

Visiting sites linked with the world famous sleuth the Sherlock Holmes Bus Tour will take fans on a three-hour tour visiting places featured in both the Arthur Conan Doyle books and also the recent TV and film dramatisations.

Brit Movie Tours director Lewis Swan explains, “one of the aims of the Sherlock Holmes London Tour is to get fans of the character a bit closer to the places they know both in the books and on screen. The Victorian London of Holmes is still very much alive and well today.”


Find out more about London Tours of TV and Film Locations: http://britmovietours.com.

Have you ever taken a Sherlock Holmes tour when you were in London or in other Canonical locations? Let us know which have been the most useful and/or rewarding by leaving a comment.