"Back From the Theatre" [RETI] 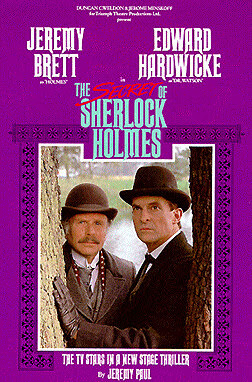 . The play ran for approximately 400 episodes in London's West End, and its run was an obvious strain on the Brett, who had already begun a decline in health that would end in his untimely death in 1995.

It's only been recently that the play has managed to see a resurgence in interest. We wrote about Shakespeare & Company's reprisal in the fall of 2007 ("Their Secret Was Out" [GREE]) and also covered it on Episode 10 of I Hear of Sherlock Everywhere. Check out those two links for full coverage of that version.

There can be no doubt that the recent Sherlock Holmes film with Robert Downey, Jr.

has also increased the attention on our favorite detective. It's no surprise then that the theatrical world should also be interested in seeing Holmes return to the stage. After all, it was William Gillette who used the stage to make Sherlock Holmes an even more integrated role in popular culture some 100 years ago.

The Stage recently reported that Jeremy Paul's The Secret of Sherlock Holmes would be returning to London's West End beginning on July 20, replacing the Fantasticks at the Duchess Theatre. In the role of Sherlock Holmes will be Peter Egan, and his friend and colleague Dr. Watson will be played by Robert Daws. Egan recently played Holmes in a stage edition of The Hound of the Baskervilles and you may recall Daws from his days as Bertie Wooster's brainless pal Tuppy Glossop in Jeeves & Wooster

There's no indication on the length of run of this show; it's likely to be fueled by the sequel to the recent film as well. If you do see it, please pop by and let us know what you thought, or drop us a line  at bakerstreetblog AT gmail DOT com and let us know if you'd care to do a guest post with a full review.