The Baker Street Journal Gets a Makeover 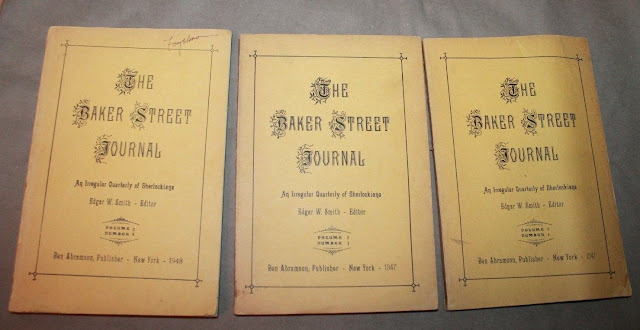 One of the mainstays of scholarship of the world of Sherlock Holmes has always been the The Baker Street Journal. Since 1946, this "Irregular" quarterly has been consistently offering the best of Holmesian essays, commentary, news and activity. And while it is published by the Baker Street Irregulars, you don't need to be a member of the BSI to subscribe - it's open to anyone who has a passing interest in the world of Sherlock Holmes.

If you're a subscriber and you received your Spring 2010 issue (Vol. 60, No. 1) of the BSJ, you may find that the old cliché "the more things change, the more they stay the same" can now applies to the Journal, as a few changes were recently instituted - and change is not something that's been welcomed at the BSJ.

Last year, under the able guidance of the team at Wessex Press, the cover of the Journal got a much-needed update when the traditional profile of Holmes by Frederic Dorr Steele was replaced by an ever-rotating image that was consistent with the content inside each issue. That has been continued with the latest issue, featuring Jude Law and Robert Downey, Jr. as Watson and Holmes:

In addition, an enclosed letter from the publisher enumerates some of the differences at the Baker Street Journal:

As you undoubtedly realize, this Spring 2010 issue of the BSJ arrives in your mailbox approximately six weeks later than usual. We thank all our subscribers for their patience.

We have been undergoing some changes here at the Journal. Times change, technology changes, and as inconvenient as this can sometimes be, these changes also bring new opportunities. This year, we have changed printers after a long 18-year run with our Sheridan Press.It seemed like a good time to make other changes as well, including returning The Baker Street Journal to the perfect binding of the Original Series, as well as an upgrade in the typesetting and production of the interior changes. This all begins with this issue at hand, but it took a little extra time to get in place. We trust you find it all worth the wait.

One thing that hasn't changed is the quality of the contents. Steven Rothman is still the guiding spirit of  The Baker Street Journal and his leadership insures that the BSJ remains the Sherlockian publication of record.

Here you can see the difference between the Winter 2009 issue and the Spring 2010 issue:

We've also given you a side view of what a perfect binding means - something especially essential for you collectors (or accumulators) who like to put the BSJ on your bookshelf.

As to the content of the Spring 2010, you can check that out on the Baker Street Journal site (Current Contents). This link changes quarterly, always giving you the table of contents of the most current issue, as well as the Editor's Gas-Lamp to read online. And if you'd like to see what some of the best articles have been, check out the links on the Morley-Montgomery Award section, where some of the decade's most recent highly acclaimed scholarship lives.

If all of this moves you, we encourage you to subscribe to the Journal. This is the premier publication of Sherlockian scholarship, and you get five issues - all four quarterly issues plus the Christmas Annual - for just $37.50 a year in the U.S. and $47.50 outside of the U.S.

And now the Baker Street Journal has an official Facebook page at http://facebook.com/BakerStreetJournal. If you're so inclined, please "like" it here:

The more people we encourage to recommend or like the BSJ Facebook page, the more we'll be able to share our unique and singular hobby with the world and encourage the next generation of Sherlock Holmes enthusiasts to join the Game.