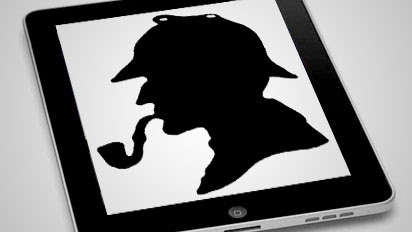 With all of the recent publicity around Apple's iPad

(as of the date of this posting, there have been more than 1 million sold), we've seen a rise in the number of apps that have been developed for it, the iPhone and the iPod Touch

. Naturally, some of those have been Sherlock Holmes-related apps (which we've previously covered).

Since that time, there have been quite a few apps for the iPad, iPhone and iPod Touch, and as a service to you, dear reader, we've assembled some (many were near duplicates, so we chose the most interesting or attractive), categorized them, and provided the prices and average ratings (on a 4- or 5-star scale). We haven't downloaded them all, so we can't provide reviews for each. We'll try to update this post with additional apps as they become available.


Perhaps our readers would like to download them and provide feedback in the comments section below - we'll keep this post hotlinked to the front page of the Baker Street Blog so viewers can easily find them and read what you've had to say. And if you'd care to let us know when new apps of interest are available, we'll add those as well.

In order to get a glimpse of each of these, simply click on the iTunes icon next to each to see it launched in iTunes, complete with a full description, reviews and screenshots.

The first of a number of apps that offer most of the Canon in electronic form, The Sherlock Holmes Collection by Fee Tan is a straightforward approach to letting you put most of the stories in your pocket. Some of the features of this app: full pagination, like the original printed editions; each title includes page numbers; Table of Contents incorporates one click navigation; remember your reading progress; swipe to turn the page; add bookmark progress.

The cover art provides a hint of Leslie Howard as Sherlock Holmes and the pages "turn" when you scroll through the text.

or Sherlock Holmes Companion (which are also highly recommended). The app is described as follows:

This Book includes the original 60 stories by Sir Arthur Conan Doyle examined in detail; brief biographies of Doyle and his famous duo; an A-Z of every actor to have portrayed Holmes on stage, film, radio and television; pastiches and spoofs; appendices that include an in depth bibliography and a look at the best Sherlock Holmes websites around.

from the 1940s with you, as Procypher Software released four different titles, each priced at $0.99. No ratings, but then again, you're most likely familiar with these films by now.

App features: Play, stop, pause, continue, volume control, progress bar, and moviemark controls. Moviemarks let you mark your favorite places in the movie so you can return to them fast and easily! The Continue feature starts the movie where you paused it even after closing the movie player.

Andrews UK Limited and Films4Phone bring us one of Arthur Wontner's

appearances as the master from the 1930s. Synopsis: Holmes is now retired. However, he gets one last call about a case involving arch enemy Professor Moriarty who has got involved with an American gang end the life of a, John Douglas, a country gentleman with a mysterious past.

Functionally, once downloaded this self-contained 'film in an app' does not require a Wi-Fi or 3G connection to be viewed; fully functioning film within the app; synopsis page / information page function within the app; director biography page.

Vook has developed an interactive reading experience - kind of like a hypertext annotated version - called The Sherlock Holmes Experience. And it's quite an experience. According to its creators, "Vook is an entirely new way to read -- it's an application that integrates video and text into one complete experience. With this vook, you can read two gripping Sherlock Holmes mystery stories and watch informative videos that pull you deep into the colorful world of 19th century London, immersing you in the spirit of detective fiction and Baker Street."

BeamItDown Software provides a number of titles to read, but they take a slightly different approach from other publishers. In their words:

Other reader applications display the text of the book you are reading in individual pages. The number of words that can be displayed on the screen at one time is determined by the size of the font used. This forces you to choose between reading with a very small font size or using a large font and changing pages every few seconds. The problem is that reading with a very small font induces eye strain, while frequent paging disrupts concentration.

The BeamItDown iFlow Reader solves this problem by using an entirely new approach to reading. Instead of paging, the BeamItDown iFlow Reader scrolls text much like a teleprompter. Large, easy to read text scrolls by smoothly as you read. The precise scrolling speed is controlled by subtly tilting the device, which quickly becomes very intuitive and natural. You can personalize your reading experience by selecting the paper color, text color, text size, and the font that you prefer to create a truly enjoyable reading experience.

Titles from BeamItDown are $0.99 and are universally rated at 4 stars:

Warner Bros., the studio that brought you Robert Downey, Jr. in Sherlock Holmes

, has its own app. This is an interactive game that invites the user to play detective:

Once inside the shoes of the World’s Greatest Detective, you must use Sherlock’s keen wit and persuasive charm to prove a man innocent of murder, without revealing your sources. The investigation will take you into the seedy, gritty side of Victorian London, overflowing with deceit and disregard for basic codes of decent behavior as you traverse the deadly back alleys. Scour the environments… Uncover the Clues… Reveal the truth in “The Case of the Innocent Man”.

The game's afoot with this app from Mobile Deluxe. Put your examination skills to the test and solve 6 mysteries based on the original Sir Arthur Conan Doyle mysteries. BONUS eBook downloads with every case you crack. Scour the world hunting for hidden clues in two immersive gameplay modes that let you become the detective. Test your skills of deduction within 30 unique environments.

Test your knowledge of the stories - both in written and film form - with the Sherlock Holmes Quiz. The most erudite Sherlockian should be able to answer most of the questions without much help, although there may be a few obscure or arcane items that only the truest devotee will know. The newbies will have enough to keep them interested without feeling ostracized, as the first level contains questions that are basic without being entirely vapid. You'll find over 400 questions and four levels of play to keep your interest and to challenge you.

? Do you miss the ability to scrawl notes in the margins of your hard copy edition of the Canon? Here's an opportunity to have both. This app from ZyngRule only includes The Adventures of Sherlock Holmes, but the list of features is impressive. Among them:
Autoscrolling - scroll through the book without touching the screen; easy built-in dictionary - expand your vocabulary by simply swiping across a word; fast text search; annotate sections of the book using the Text Bookmarks and Notes features, email the notes for further editing; stylish, animated graphics and a plethora of fonts and colors; realistic paper texture backgrounds for book pages; sound effects; night mode support.

The Adventures of Sherlock Holmes eBook (ZyngRule) - $0.99, no ratings yet.

The Sherlock Holmes Guide to London is a great way to combine your interest in the character with a walking tour of some of the famous sites in the stories. There are plenty of photographs of the locations and attractions. For example, the first 40 locations from Leicester Square to Baker Street cover four miles and include walking directions as well as Tube stops and other transportation.


Don't forget: If you'd like to download any of the above apps and provide feedback in the comments section below, we'd appreciate it. Also, if you know of any other worthy of inclusion, please let us know. This post will remain on the front page of the Baker Street Blog so viewers can easily find them and read what you've had to say.
5/16/2010 01:53:00 AM
blog, fun, Multimedia, News, reader participation