"Where Are the Slippers Now?" [VALL] 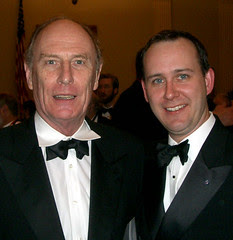 If you happen to be in Connecticut or New York at all this summer, there's a play you might consider seeing. Not that it's a Sherlock Holmes play, by any stretch of the imagination. But the casting - at least in one regard - is very Sherlockian.

Al Rosenblatt, BSI ("Inspector Bradstreet") has informed me that Paxton Whitehead will be appearing at the Westport Country Playhouse in Westport, CT from July 12 - July 27, 2007 in Relatively Speaking, a comedy.

According to the site, the plot goes something like this:

Greg falls madly for Ginny whose affections are elsewhere. Greg follows Ginny when she goes on an unexpected visit to ‘see her parents.’ Meanwhile, Philip suspects his wife, Sheila, is having an affair. Sheila is not the least bit suspicious of Philip. Could Sheila and Philip both be wrong? Who are Philip and Sheila’s unexpected guests for Sunday lunch?

A marvelous mixture of misunderstandings, mistaken identities and incriminating slippers.

I would like to thank you for posting on your blog that Paxton Whitehead will be appearing at the Westport Country Playhouse in Westport, CT. I have been a fan of Mr. Whitehead’s since he starred in "Marblehead Manor" as Albert Dudley the Butler.

In addition to his past casting as Holmes, Paxton Whitehead is a noted director (and authority) of the plays of Bernard Shaw. The Westport County Playhouse has recently been rebuilt and expanded, and now boasts more than 500 seats. Player Joanne Woodward, who played Dr. Watson to George C. Scott's Holmes in Anthony Harvey's "They Might Be Giants," is the past artistic director of the Playhouse and remains an involved benefactor.

As for Mr. Whitehead, who was terrific in "Absurd Person Singular," he's giving acting lessons in "Relatively Speaking." He gets his laughs effortlessly, playing each scene with the easy economy of the old pro that he is. I would have gladly paid good money just to hear him read his lines out loud in his plummy, rumbling basso voice.

Mr. Teachout, the Journal's drama critic, blogs about theater and the other arts at www.terryteachout.com. Write to him at tteachout@wsj.com.