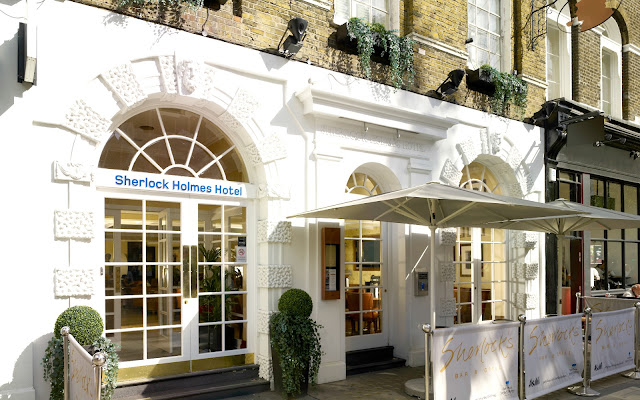 One of the destinations of many Sherlockian tourists in London is the Park Plaza Sherlock Holmes Hotel, a (now) boutique hotel on Baker Street that is part of Park Plaza Hotels of Europe.

Although the exterior retains that classic Baker Street look, including some very large bow windows on the first floor (that's second floor to you Yanks), the accommodations inside are much more modern. And the rates, while not outrageous by London standards, may be more than the average tourist can handle - especially given the current exchange rate of the U.S. Dollar and the British Pound.

Actually, the room rates are fairly reasonable, given the style and comfort of the hotel, as well as the notion that you're staying just a block or two away from 221B.

And there's an excellent reason to visit the Sherlock Holmes Hotel before October of 2007. Via Hotel-Online.com, comes news of major awards from Park Plaza Hotels:


The award for General Manager of the Year was awarded to Greg Hegarty at the Park Plaza Sherlock Holmes London. During his 13 months at the company's boutique-style hotel on Baker Street, Greg made significant and innovative improvements to the property, motivated and inspired his team to deliver exceptional levels of customer service and transformed its financial results with a 23% year on year sales growth. At just 29 year's old, Greg is one of the youngest General Managers on the London circuit and has more than earned his recent promotion to open the forthcoming 398-room Park Plaza County Hall London this October.

Should be added that the Sunday roast is absolutely amazing :D