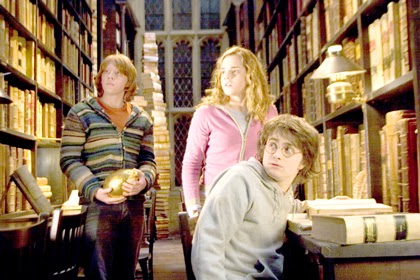 The end is nigh. At least that’s what the publishing world would have us believe. With the advent of the final Harry Potter book this summer, there’s a fear that with J.K. Rowling’s long-awaited finale will come the end of the cottage industry of related Harry Potter books.

The May 10 edition of the Wall Street Journal ran a piece (Last Hurrah for ‘Harry’ Offshoots?) in which the books about the books were called “a whole literary ecosystem,” while the original Potter canon was likened to “whales to which many barnacles have attached themselves.” With over 190 books in print, it’s easy to see why. But is there cause for concern about the demise of Potterian scholarship and publishing?

I think you know where I’m going with this. We’ve seen this phenomenon before, with Sherlockian scholarship paving the way. Before Sir Arthur Conan Doyle (or was it Dr. Watson?) had completed the Canon in 1927, Ronald Knox had penned his seminal treatise Studies in the Literature of Sherlock Holmes in 1911. Only four years after Conan Doyle’s death did the Baker Street Irregulars came into being; it was just over a decade later that they began publishing the Baker Street Journal.

To this day, Sherlockian scholarship has not dimmed. The BSJ is still being published some 60 years later. In England, the Sherlock Holmes Journal is churned out on a regular basis and has been for over 50 years. Countless societies around the world continue with their own publications; online discussion groups flourish.

Of course, the characters were never under copyright, so great liberties have been taken by a variety of authors, placing Holmes with concurrent historical figures and other literary characters, as well as in unlikely situations including sailing on the Titanic and getting married.

While the Harry Potter characters will be well protected from such pastiches in the short term, parodies and pure scholarship are fair game. I suppose the question remains: will the seven original books continue to hold the interest of future generations in the same way they’ve enchanted the current adolescents and adults alike? If so, is the content of such a rich type that unending scholarship can continue to be churned out, or are these simply “beach books” – sensational and fun reading - that helped sustain the publishing industry for a short time?

I'll close with a more controversial question for you, dear reader: were the Holmes stories simply viewed as Victorian/Edwardian beach books? It seems like many in academia today treat them as such.

And a list of some of the titles in print mentioned in the WSJ story:

Just a quibble - I don't think Harry as a character has any more copyright protection than did Holmes. When the first Potter story loses copyright protection I think people will be able to create Potter pastiches (unless some other restriction like trademarks are used to prevent it).

Not a problem. I encourage quibbles, squabbles and occasionally rabble-rousing.

In this case, I demur to the publishing legal expert quoted in the Wall Street Journal article:

Copyright law will prevent other authors from offering new titles using Ms. Rowling's characters and settings unless they're obvious parodies. "Boundaries exist," says David S. Korzenik, a publishing attorney with the firm Miller Korzenik Sommers LLP. "Characters can be copyrighted, and settings can be protected," he says. "But if you are doing a parody you can go forward with the understanding that the parody won't be book eight or nine of the series but rather is trying to deliver something very different or transformative."

It sounds as if Ms. Rowling learned from Arthur Conan Doyle's mistake.

Two points re: copyright:
1) IF characters have copyright protection, presumably it has the same time limit as standard copyright. Thus once the copyright expires on the first Potter story, the so-called character copyright also expires.

2) I know attorney's have advocated for character copyright (it's good business for them), but am not aware of that specific provision in copyright law or court findings supporting it. If anyone does know that please add to the discussion.

The related question is: Did Conan Doyle have the same protection for Holmes as Potter has now, or did law change in a way that provides more protection for a character?