The Adventure of the Non-Smoking Sherlock Holmes 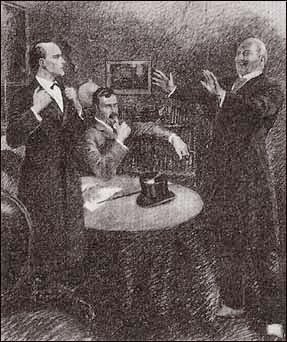 First it was the politically-correct BBC bowing to current groundswell when they barred Sherlock Holmes from smoking in their recent production Sherlock Holmes and the Baker Street Irregulars starring Jonathan Pryce.

Now it seems that the Motion Picture Association of America (MPAA) - the entity that is responsible for rating movies – is using smoking as one of the factors in deciding how to rate movies. They have not delineated any specifics, but it is thought that if a film already has a PG-13 rating thanks to levels of violence, drug use and sex, smoking will tip it over the edge to make it an R movie.

Evidently, anti-smoking activists think this doesn't go far enough, as they would like to see an automatic R attached to any movie that features smoking. They want to protect the children.

But I ask: would a Sherlock Holmes movie with a tobacco-free Holmes help the kids? Would they be better off by seeing the first unofficial consulting detective without his pipe? Think about it: the entire world knows Sherlock Holmes because of his profile in his hat and his pipe. Remove the latter and he’s just a mad hatter.

Just think of the consequences:
We've seen the modern version of this taken to its logical conclusion in the BBC's Sherlock with the three-patch problem utilizing nicotine patches instead. But Sherlock and Mycroft do enjoy a cigarette from time to time, despite the best efforts of Watson and Mrs. Hudson.

These are the ramifications if the character were forced to go cold turkey. If he retained all of his addictions as we know them, it seems that any Holmes movie would likely receive an R rating, thus keeping away the younger crowd. As if we need any more obstacles in introducing Sherlock Holmes to kids…

Well this certainly is a 3-something-or-other problem. You are right that Holmes needs to smoke and that is historically if not politically correct.

How about allowing Holmes to smoke while a subtitle proclaims:
"This is a professional actor on a closed set. Don't try this at home." or maybe Holmes could make a sour face after each puff and exclaim something like: "My tobacco addiction is killing me. You shouldn't smoke."

I am a non-smoker and have no objections to public smoking bans, but changing history and cleansing literature go beyond protecting the public health.

Seems to me just one more example of the 'do-what-we-tell-you-is-good-for-you' lobby making fools of themselves.

I make no bones about the fact that I smoke. Have done for more years than I care to remember. I don't have a problem with smoking bans in restaurants - where even as a smoker, I find smoke offensive. I do have a problem with such bans being extended to public bars, which, traditionally, have been an enjoyable place to relax with a smoke and a pint of foaming ale, or suchlike. I also have a problem with smoking bans in what now seems to be every other public place. As a smoker, I do what I can not to share my smoke with anyone nearby who isn't smoking; and I frankly don't see what's wrong with smoking in the open air: there are far more pollutants around than a few cigarettes.

But if we smokers are intended to be made the pariahs we seem to be classed as, governments should put their money where their mouths are. Let's have a total ban on tobacco. Will they do that? Of course not, because the minority that wants to smoke lines government coffers with billions of tax dollars each year - tax dollars which they wouldn't have a clue how to replace without levying additional penalties on every earner. Imagine the outcry then!

But I digress. Holmes without his pipe, his plugs and dottles, is unimaginable and totally unnecessary. Why, a tobacco ban in Holmes's time would have robbed the world on that most important of monographs: 'Upon the Distinction of the Ashes of Various Tobaccos'. And, of course, it would have robbed the Baker Street rooms of some of their furniture: what need would there be for the coal scuttle if Holmes had no cigars to keep in it? And the thought of Watson's tobacconist, Bradleys, having to close their doors because of having no merchandise to sell? Unthinkable!

Get real, film-makers, and do-gooders. This is 1895, you know. Welcome to the real world.

Perhaps, he could have saved John Openshaw if he eschewed tobacco for a three-pip problem.

As for his Persian slipper, why not Beluga or perhaps smoked salmon or a kipper?

And I avoid disputatious circumstances.