This morning we learned the sad news of the passing of Michael F. Whelan, BSI (“Vincent Spaulding”), who served as “Wiggins,” or head of the Baker Street Irregulars, for 23 years.

We're still gathering our thoughts around this news, as it is as personal as it is profound. It was under Mike's leadership in 2001 that your editor received his investiture, “Corporal Henry Wood.”

Mike was the second-longest serving head of the BSI (Julian Wolff served 26 years, from 1960-1986). And in his time, it is fair to say that he transformed the BSI. He approached it with a businessman's eye and acumen, delegating much of the responsibilities to eager volunteers. His accomplishments are legion.

“all they want is organisation” [STUD]

Mike squarely positioned the Baker Street Irregulars as a literary society, shaping its focus and giving the organization ten so-called exemplars that members should strive for:

Having such guiding principles and aspirations give any organization and its members the impetus to constantly challenge themselves to do better. And that's what Mike wanted.

“I have been guilty of several monographs” [BRUC]

Mike took what was once a side-interest of the BSI and turned it into a central focus: the small red-backed volumes that Edgar W. Smith (the BSI's Commissionaire from 1940-1960) published and that the BSI Archival Series echoed became the BSI Press under Mike's leadership.

The BSI Press became a powerhouse of a small press publisher, cranking out more than 60 volumes. From the BSI Archival Series that focus on the history of the organization to the BSI Manuscript Series, BSI International Series, and BSI Professions Series, Sherlockians worldwide were given a chance to read more deeply about Sherlock Holmes.

“a series of events” [DEVI]

The famed BSI Weekend was always the centerpiece of the BSI's year, but Mike sought to extend the BSI's geographical presence beyond New York City. He tapped various members across the country to develop associated excursions every few years. Some of these included:

Each of these had an accompanying publication that captured the scholarship shared at the associated event.

At the BSI Weekend itself, Mike established the BSI Distinguished Speaker Lecture, to kick off the events on Thursday evening. This event brought in an author to talk about their particular area of focus.

“for the sake of the trust” [MUSG]

In addition to events and publications, Mike's crowning achievement was the establishment of the Baker Street Irregulars Trust. The BSI Trust is a 501(c)3 non-profit organization whose purpose is "to collect, preserve, and provide access to historical documents, correspondence, papers, photos, recordings, and memorabilia relating to the BSI and its members and friends."

As part of that mission, the Trust established the BSI Archive first at the Houghton Library at Harvard University, and then moved to the Lilly Library at Indiana University.

I Hear of Sherlock Everywhere was at the opening celebration, "Building an Archive," and reported on it in Episode 180. We also had an interview with the first head of the BSI Trust, Tom Francis.

I Hear of Sherlock Everywhere · Live from the Lilly Library

“he must certainly have been a giant” [WIST]

It's impossible to effectively state how profound Mike Whelan's impact on the Baker Street Irregulars was. He went everywhere, saw everything, and overheard everyone in his mission to keep green the Master's memory.

And while he was the first to admit that his role was one of a "benevolent dictator," he did more to empower individuals to contribute to the future of the BSI than anyone before. He rightly observed that he viewed his role as one of a steward, a temporary leader, on the evolution of the institution.

He had a succession plan, leaving Michael Kean, BSI (“General Gordon”), who had led the publications arm, in charge of the organization — a multi-year plan with plenty of coordination and collaboration. When he handed over the reins, Mike was confident in the direction and stewardship of the BSI under Michael Kean's leadership.

Mike closed his final letter to the BSI membership:

“And so, dear fellow members, this is the last formal “Wiggins” letter I’ll be sending to the membership. It has been a great ride. My deepest thanks to Irregulars whose special support made my job easier and made me look better than I was. Special thanks to Mary Ann, my spouse of 43 years, who steadfastly supported me during my journey as Wiggins, and toiled in the BSI vineyard, the extent to which no one may ever fully realize. I’ve made many lifelong friends from all over the world in this Sherlockian universe of ours. What a job it has been, if you can call it a job… more, a joy. It actually was a grand privilege running the BSI, a literary society like none other.”

We will miss Mike's presence, both in person and in spirit, at the BSI. But his legacy will live on.

You can listen to our conversations with Mike, as chronicled in episodes 14, 15, and 71 of I Hear of Sherlock Everywhere:

The BSI appropriately honored Mike in one of the latest entries in the BSI Biography series: “A Quiet Air of Mastery” from the BSI Press.

Meanwhile, here are some photos of MIke throughout our years at BSI events. Click to enlarge. 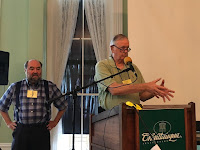 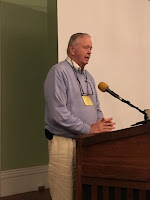 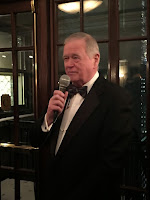 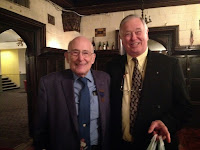 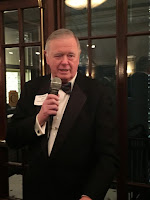 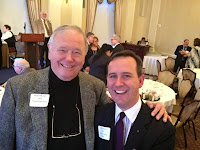 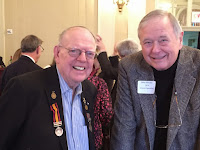 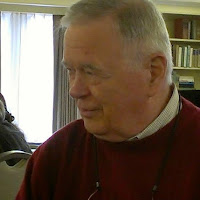