Book Review: One Must Tell the Bees 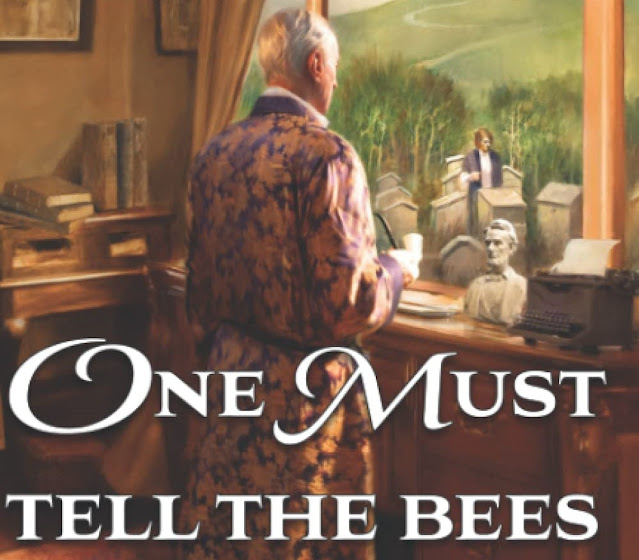 All these and more await the reader of J. Lawrence Matthews' fine new novel One Must Tell the Bees: The Final Education of Sherlock Holmes.

For a man who is considered immortal by most of his faithful readers, Sherlock Holmes has tasted death at least a few times. Famously his fall from the Reichenbach began this trail; Doyle famously desired to end his connection to the Baker Street sleuth, but Sir Arthur soon found that life without Sherlock was just not worth living. He never again attempted to end the life of the world's favorite sleuth.

Other authors have considered the ultimate passing of the great detective, but surprisingly not many hits come up when searching for the death of Sherlock Holmes. Many works confront the elder years of the Baker Street sleuth, but who has the temerity to write the last moments of the immortal?

In his new novel, One Must Tell the Bees: The Final Education of Sherlock Holmes, author J. Lawrence Matthews gives readers a chance to perceive the scene we all know must have taken place sometime during or after the Great War—Holmes's last dated case is "His Last Bow," in which Watson assures us that Holmes is still alive though slightly rheumatic—the death of Sherlock Holmes.

First news of Matthews' novel instantly thrilled me, as early publication info purported it to be the story of a young Sherlock, brought to America and immersed in Washington City as the Civil War explodes around him. Hints pushed me further—Holmes on the trail of the assassin! Booth cornered and the game afoot! I eagerly consumed the novel, which, at 500+ pages, took a few weeks.

To give a quick encapsulation—One Must Tell the Bees is at once the tale of Holmes's "first" case ("The Gloria Scott" and Barry Levinson's Young Sherlock Holmes notwithstanding) and the tale of his last case—respectively, the hunt for the killer of Abraham Lincoln and the search for a killer who strikes on the train Watson takes to visit his old friend in the English countryside.

Matthews creates a fabulous version of the end of the American Civil War and the hunt for Booth that will have readers turning their pages swiftly, eager to see Holmes on the trail of perhaps the most famous murderer of the 19th century.

Also included in the work is much biographical information about the nebulous early years of Holmes, and even a twist on his name and that of his hyper-productive brother, Mycroft. As the scene shifts to the second mystery and the solving of the train murder, the family tree of Moriarty is explored, as is the master plan of Holmes's greatest opponent. Fans of both the American Civil War and of the immortal sleuth will take great delight in this amazing novel.

Certainly, any novel with major intent will raise questions in readers, and my mind filled with queries as I considered Matthews' assertions about the nature of the relationship between Lincoln and Holmes, and also about a friend Sherlock makes in the War.

The Black youth who accompanies Holmes on the trail of the assassin raises questions of race in the Canon, and exactly how Doyle, if not Holmes himself, perceived color and race in his era and country.

Just as problematic for some readers may be Matthews' continued lionization of the American traitors Robert E. Lee and Thomas "Stonewall" Jackson, but overall the novel has a positive tone and gives the reader an amazing vista across which the action is set: the streets of London in Holmes' youth, the muddy byways of Washington City during the crisis of secession, the swamps of Virginia on the trail of Booth, and of course the peaceful English countryside of the Seven Sisters of Sussex and the local pubs and farms nearby.

Any review of this book would be remiss if it did not mention the powerful climax, which as mentioned above gives readers a chance to perceive and consider that which few writers and filmmakers have dared to envision: the final breaths of Sherlock Holmes.

I will not spoil the plot points but will leave the clue that the story's back end is set near the end of World War I. The passion and empathy with which Matthews constructs these scenes make the book a gem, a treasure to be talked about and remembered for some time to come.

One Must Tell the Bees: Abraham Lincoln and the Final Education of Sherlock Holmes is available on Amazon and wherever books are sold.