“You used to shoot lions in Algeria.” [MAZA] 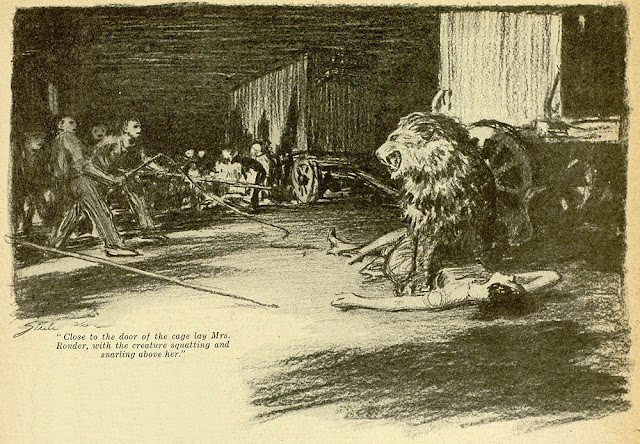 An Associated Press report from September 10, 2020, noted the rare birth of three Barbary lion cubs, which are extinct in the wild, in Safari Park Dvůr Králové, Czech Republic, which is the second largest zoo there. It specializes in, and has, Europe’s largest group of African wildlife and one of its missions is to protect endangered species. (The park also reported the birth of one male and one female cub in 2019.)

The Barbary lion (Panthera leo leo) is also known as the “Berber lion”, “Egyptian lion,” “Atlas lion” and, most familiar to Sherlockians, the “North African lion.” It was Sahara King, that “very fine North African lion,” that was used as a red herring in the Canon’s penultimate tale “The Adventure of the Veiled Lodger.”

Leonardo the strongman conceived the plot to use a club shaped like a lion’s paw to strike down famed circus owner Ronder to control his much-abused wife Eugenia and her inherited fortune, leaving the unfortunate caged animal holding the bag. Not for the first was this specie of feline the tool of base human wants and deeds.

The Barbary lion’s range was the north and northwestern area of Africa known as the Maghreb through to Egypt. They had long been regarded one of the largest lion subspecies (with males weighing between 400-650 lbs [181 to 295 kg] and females 270-400 lbs [120 to 181 kg]), with long dark-haired manes that grew over the shoulders and down to the belly.

These morphological features, once thought to be distinct, are being called into question. The weights estimated by nineteenth century hunters are considered inaccurate and the signature mane a product of the Atlas Mountains colder climate as other lion subspecies grow such manes in cooler North American and European zoos. Mitochondrial DNA research does support a separate genetic identity for Barbary lions, however.

The lions were kept, for their supposed unique majesty, by royal African and Egyptian families. The Romans exported them to the Colosseum where thousands died in gladiatorial games. They were trafficked all over Europe. In 1937, workmen uncovered twogenetically confirmed North African lion skulls, carbon dated to having lived, one between 1280 and 1385, the other 1420 and 1480.  High-class Victorian London hotels sometimes had them on display as well as circuses like Ronder’s.

The year 1896, when "The Veiled Lodger" is stated to have taken place, found one famous Barbary lion, Sultan, living at the London Zoo.* The expansion of the Arab world shrunk the lion’s habitat greatly and European hunters, such as Count Negretto Sylvius (of "The Mazarin Stone" fame) finished them off.

At the time of the publication of "The Veiled Lodger," (the January 22, 1927 edition of Liberty in the US, February 1927 The Strand in the UK), the last Barbary lion was thought to have been killed by a hunter in Morocco in 1922.

Yet another death of a hunted lion was reported in the 1940s and sighting of single or small family groups were reported in Algeria and Morocco in the 1950s and early 60s. The Barbary lions are reasoned to be extinct in the wild and of the 100 or so in captivity there is a question of many of the cats' genetic purity.

Down to Earth conducted an interview with Simon Black, a conservation science lecturer at the University of Kent, UK, about the lion’s future. “Some existing large tracts of land in north Africa would be suitable for reintroduction,” he said, “but considerable effort would be needed to restore sustainable levels of wild prey species (deer, boar, barbary sheep and gazelle), most of which are endangered species themselves.

“Also protective measures to avoid human-lion conflict, including livestock predation would need to be implemented.

“Reintroduction is theoretically possible but would need a sensitive long-term plan and considerable prior political and community support. Reintroduction of a predator like lions would have to be part of purposeful, wider landscape restoration in the region.”

As for Sahara King himself, not much information is given in the story. Life in captivity has little positive to speak for it even in more enlightened times. The remains of the Barbary lions housed in the Tower of London show they were not well kept, being malnourished, which lead to skeletal deformities, possible paralysis, blindness and eventual death.

Ronder, Holmes informed Watson, was an alcoholic, “huge bully of a man, he cursed and slashed at everyone who came in his way.” It is doubtful he treated his animals any better than he treated his wife or other humans. Sahara King’s eventual outcome is never stated, but having been framed for Ronder’s death and for mauling Eugenia, he was no doubt destroyed.

To paraphrase Holmes, “Is not his story a microcosm of the whole” of those large cats that once roamed free the north of Africa whose lives in the wild came to the end by the hands of humans?

*Coincidentally, a four year old Barbary lion, also named Sultan, was donated to the newly opened lion house at the Bronx Zoo in 1903. Photos of the Bronx Sultan will often show up in a Google search for the London Sultan.