Review: A Pocketful of Lodestones by Elizabeth Crowens

“and the traveler has to return as he came” [FINA] 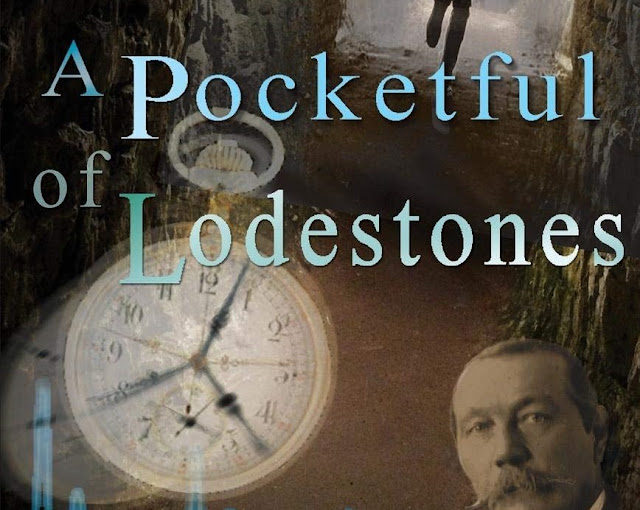 As scholars of the Holmes canon, many Sherlockians often find themselves exploring the other literary work of Sir Arthur Conan Doyle. Despite the canon being his “highlight,” there are many intriguing novels and stories that highlight Arthur Conan Doyle’s writing style.

Two such examples are found in Elizabeth Crowen’s novels in the Time Traveler Professor series: Silent Meridian and the recently published follow up A Pocketful of Lodestones.

Both books center around John Patrick Scott, a man who partners with Conan Doyle around issues of spiritualism...and time travel. Silent Meridian consists of a series of adventures in time travel with a healthy dose of intrigue (including a shift in Scott’s relationship to Conan Doyle, the activities around a mysterious red book, and shifting encounters with a variety of Victorian-era historical figures).

As the initial entry into the series, Silent Meridian reads more like several vignettes rather than a single novel, but that plays to Crowen’s strength as a writer. Ideas, plot strands, and characters are woven into the narrative in prose that reads like an approximation of Conan Doyle’s style yet maintaining a unique tone and voice.

But A Pocketful of Lodestones, the second book, is where Elizabeth Crowens solidifies her voice and vision. Building on the events of Silent Meridian, Crowens crafts a more cohesive story by documenting Scott’s activities during World War I. Both books have a unique charm due to their wide panoply of clever and imaginative ideas that never feel forced or self-conscious. Elizabeth Crowens tells a very unique story across both volumes that serves as a delightful, enjoyable read.

One of the delights of the book is how Crowens uses Arthur Conan Doyle as one of the lead characters. Although many Sherlockian pastiches integrate historical characters into their tales, Crowens’ inclusion of Conan Doyle never feels forced — in fact, Conan Doyle becomes a very intriguing character throughout both books.

Although difficult to explain without spoiling, some of the events surrounding Scott’s and Conan Doyle’s relationship will be especially intriguing to Sherlockians. (And yes, Sherlock Holmes plays a key role throughout both books, but not in the way you might imagine). And there’s a passage in A Pocketful of Lodestones that will have you rethinking—and possibly revisiting—Conan Doyle’s work on The Lost World.


Both books in the Time Traveler Professor series are available in softcover and Kindle form and both books provide for great, pleasurable reading.

Elizabeth Crowens deserves kudos for crafting a unique story through both Silent Meridian and A Pocketful of Lodestones, and will make you eager to catch a potential volume three.