"devoted some attention to this, and written a little monograph" [BOSC] 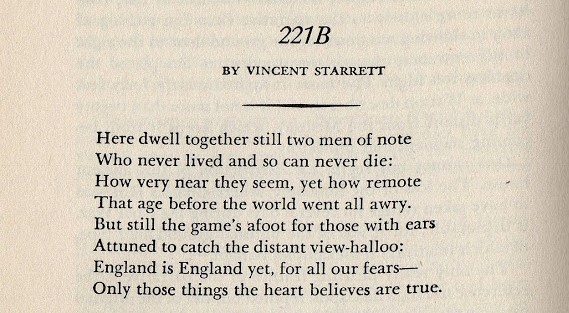 Virtually every Sherlockian knows the poem "221B" by Vincent Starrett, BSI ("A Study in Scarlet").

Starrett was one of the giants in the early Sherlockian world, and his works are still remembered today. Some of them (particularly his non-Sherlockian work) may be unfamiliar to many, but that's been changing in recent years, thanks to the intrepid and tireless efforts of Ray Betzner, BSI ("The Agony Column").

Ray writes and edits Studies in Starrett, the blog dedicated to exploring the life and works of Charles Vincent Emerson Starrett. Ray is probably the foremost expert on Vincent Starrett, along with Susan Rice, BSI ("Beeswing"). You may recall that the pair appeared on I Hear of Sherlock Everywhere Episode 61: The Private Life of Vincent Starrett.

Ray's work on Studies in Starrett has made it abundantly clear how much passion he has for his subject and how much enjoyment he derives from it. Through meticulous research — and a little Sherlockian deduction — Ray is able to discern details about books, inscriptions, and other related items that are part of the Starrettian lore.


The Netflix of Sherlockian Blogs

Today, Ray launched a series of entries all about the origins of what it probably Vincent Starrett's most famous work among Sherlock Holmes enthusiasts: his iconic poem from 1942 titled "221B."

This is a poem that is almost universally read at Sherlockian gatherings. The line "and it is always 1895" has become synonymous with the time and place of Sherlock Holmes, and at this point is nearly Canonical in its usage and recognition.

Ray has written eleven chapters that chronicle the poem, from a background of the time and place in which it was written, to Starrett's struggles and hopes and his love for Sherlock Holmes, early origins of the verses, its dedication and first appearance, and its spread and ultimate fame.

The chapters are laid out below, each one seamlessly leading to the next. They are amply complemented with illustrations, scans, manuscripts, photos, and even audio clips. It's a delightful multimedia journey through Starrett's work.

Chapter 1: Introduction and Prologue: ‘Where it is always 1895’
Chapter 2: 'So they still live for all that love them well'
Chapter 3: ‘Some of the most dramatic months… of contemporary history’
Chapter 4: ‘Here dwell together still’
Chapter 5: ‘He has done many little things for me’
Chapter 6: ‘A wider circulation’
Chapter 7: ‘Part of a slim volume’
Chapter 8: ‘This poem by my good friend’
Chapter 9: ‘Something remains of London in 1895’
Chapter 10: What is it we love about ‘221B’?
Chapter 11: Afterthoughts and Acknowledgments

We're very glad to see this dissertation on one of the Sherlockian world's finest poems. Would it be too much to hope for this in printed form?


If you'd like to hear more about Ray's passion for Vincent Starrett, we spoke to him about the evolution of the site on Episode 169: Studies in Starrett.