I Hear of Sherlock Everywhere Is Now on Spotify 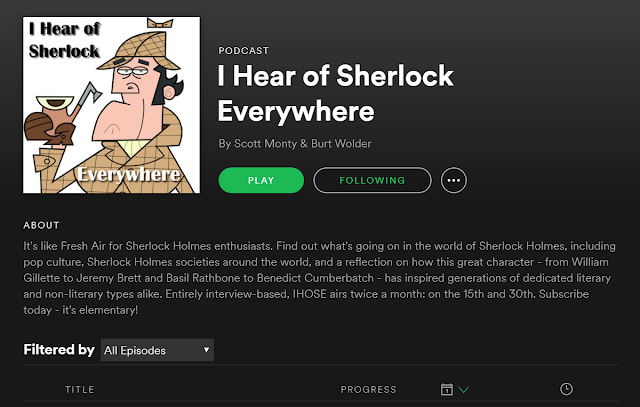 Those who have been around our site for some time know that we have a show on which we interview notable Sherlockians. It's called I Hear of Sherlock Everywhere (go figure!) and it's like Fresh Air for Sherlock Holmes fans.

We release two interview episodes each month, on the 15th and 30th, and since our very first episode in June 2007, we've made it available on traditional podcast outlets. This initially included only iTunes, but over the years has expanded to pretty much wherever you can get podcasts, namely: Google Podcasts, RadioPublic, Soundcloud, Stitcher, iHeartRadio and Spreaker.

Today we're pleased to share that I Hear of Sherlock Everywhere is now available on Spotify.

Previously, we were prevented from being on this platform because our show didn't air frequently enough. The guidelines indicated that shows needed to daily or weekly to be considered for Spotify. Which meant that our other show, Trifles, a weekly discussion of elements in the Sherlock Holmes stories, was immediately accepted. 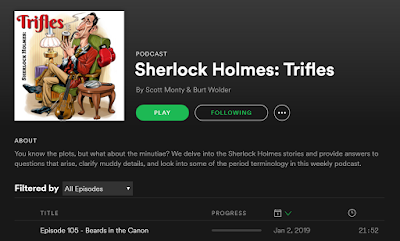 Thanks to our hosting site Libsyn, who made the integration possible, you're now able to stream or download our main I Hear of Sherlock Everywhere show on Spotify.

You can get to it by clicking on the link above, or via the embedded playlist below.


We hear from listeners from all over the world who have different ways of listening to the show: directly from the website, downloaded to a device, via a link, on a embedded player, on various podcast platforms. Our goal is to be everywhere and allow our fans to listen in whatever ways make sense for them.

We hope you'll enjoy our programming and share the news with those who'll find it useful.