Gifts for Supporters of I Hear of Sherlock Everywhere and Trifles

Over the course of the holiday season, some watchers on Facebook may have seen images of an I Hear of Sherlock Everywhere mug pop up from time to time.

These were gifts from the creators of the show to our patrons from 2018 who supported the show to a certain level throughout the year.

Because of how well they were received, we decided to create a more formal set of tiers for our supporters so you can help keep this site and the shows (both I Hear of Sherlock Everywhere and Trifles) going.

Here are a few shots from some satisfied patrons:

The show has been a hobby for Burt and Scott since July of 2007 (the site for Scott since August of 2005), and they have self-funded it, along with the help of sponsors like Wessex Press and The Baker Street Journal.

But it's readers and listeners like you who really make it possible. And we wanted to show you how much we appreciate it.

The following rewards are available for supporters of I Hear of Sherlock Everywhere and Trifles, via Patreon and PayPal. Our preference is that you use Patreon, because of the tracking of patrons and rewards there, but please do what feels most comfortable to you.

For your car, refrigerator, laptop, or anywhere else you can stick something. Available for pledges beginning at $6 per month.

Available in two different designs with the shows' logos, one saying "I hear of Sherlock everywhere since you became his chronicler." - Mycroft Holmes. And the other saying "There is nothing so important as trifles." - Sherlock Holmes. For our supporters at the $10 per month level. 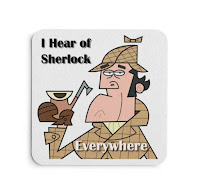 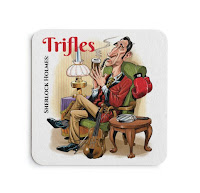 Don't leave a Second Stain on that coffee table! Protect it with your IHOSE or Trifles coasters. This set of four cork coasters is available for our supporters beginning at the $15 per month level. 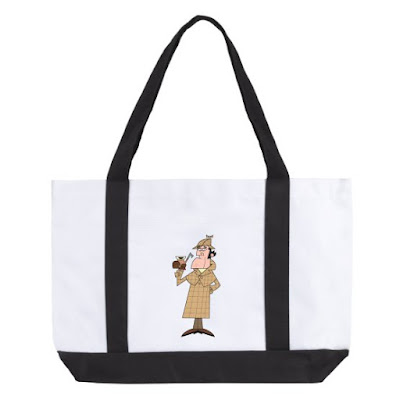 Because what good pledge drive wouldn't include a tote bag for all of your books? Available for supporters who pledge $20 a month. 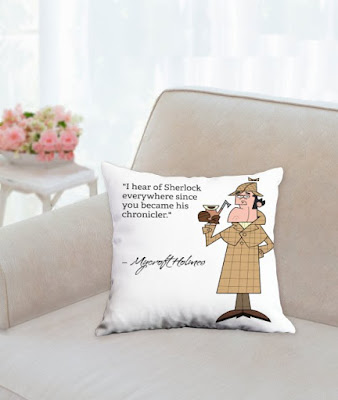 The final tier for merchandise is at for pledges of $40 per month. Get your very own IHOSE pillow to accent your home. Tuck in with a good book and this companion.


We have other rewards at higher levels, which include sponsorship opportunities, custom voicemails, and guest appearances on our shows.

And if we unlock a collective $100 per episode level, we'll be able to provide transcripts on a more regular basis. That is, if the full total of pledges from everyone reaches $100 per episode for I Her of Sherlock Everywhere, we'll be in a good place. We're not too far away now!


For those who have contributed, already, thank you. Your support means more than you know. And for those who have been waiting for something tangible to justify your generosity (other than our dulcet voices), here's your chance.