////]]>
Home » blog » canon » Chris Redmond » scholarship » What Was Jefferson Hope Singing in A Study in Scarlet?

What Was Jefferson Hope Singing in A Study in Scarlet? 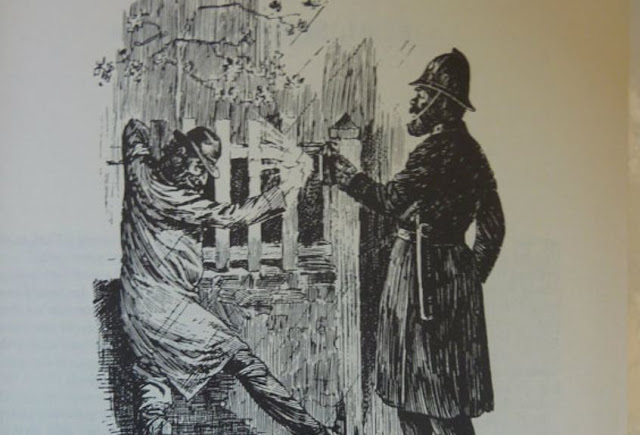 Jefferson Hope, the villain or possibly hero of A Study in Scarlet, had to pretend to be drunk when he encountered a policeman right after killing Enoch J. Drebber. Constable John Rance told Holmes and Watson

"He was at the gate when I came out, a-leanin' up ag'in the railings, and a-singin' at the pitch o' his lungs about Columbine's New-fangled Banner, or some such stuff."


A perfectly reasonable reaction to that statement would be skepticism: "new-fangled" banner? Really? It sounds like a twentieth-century word, the sort of word your grandfather would have used about automatic transmissions. ("These modern gramophones are a remarkable invention," Sherlock Holmes said in, probably, 1903.) Indeed, my heart leaped briefly as I wondered whether Arthur Conan Doyle had invented it. He did, after all, invent a number of words, or new meanings for words, including "snick," [NAVA] "grimpen," [HOUN] and "wonder-woman." [ILLU]


But it is not so. The Oxford English Dictionary, which had advanced no farther than the letter B when A Study in Scarlet appeared in 1887, got to the N-words by 1907, and when the entry for "newfangled" (no hyphen, please) appeared, it adduced many uses of the word dating back literally hundreds of years. "Let vs se and examine more of this newfangled philosophye," one scholar wrote in, apparently, 1531. A 1603 translation of Montaigne's essays referred to "new-fangled and vicious introductions." Shakespeare also uses it.

In any case, Jefferson Hope is not likely to have been singing about newfangled anythings. To a modern ear, the song John Rance heard was self-evidently about a star-spangled, not new-fangled, banner, and one thinks of the song by that name that became the national anthem of the United States in 1931, a mere fifty years after the events in Lauriston Gardens. True enough, "The Star-Spangled Banner" was written in 1814, reflecting events in the then recent unpleasantness known as the War of 1812, and it could well have been known and sung in 1881, the year A Study in Scarlet apparently takes place. Jefferson Hope was, almost ostentatiously, an American.

But "Columbine" still needs some explaining. The editor of the relevant volume in the Oxford Sherlock Holmes series says in an endnote that Hope "automatically sings American patriotic songs ('Hail, Columbia!' and 'The Star-spangled Banner')." Maybe so, but "Columbia" is not "Columbine", not quite. 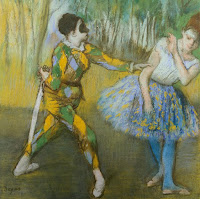 "Columbine" would be a more familiar name than "Columbia" to the ear of London constable John Rance. Columbine is the consort of Harlequin in British pantomime, which is not "pantomime" as the rest of the world knows it, but a form of down-market comedy embracing the Harlequinade, which is derived from the Italian commedia dell'arte. The Harlequinade involves love scenes and other clichés including a slapstick police chase which may be the original of the Keystone Cops. (Things are getting complicated, even without bringing in the currently popular figure Harley Quinn, who is associated with the Joker, who has battled Sherlock Holmes in a classic 1976 comic book and in other media — oh, whatever.)

"Hail, Columbia" dates from 1789 and is not now familiar unless you're the Vice President of the United States, whose official tune it is. Rather better known, and possibly a more likely choice for Jefferson Hope in his improvisation, is the song "Columbia, the Gem of the Ocean." Written in 1843, it was (along with "Hail, Columbia") a candidate for the role of national anthem until "The Star-Spangled Banner" won out in 1931. One of its stanzas begins thus:

And if that isn't "Columbine's new-fangled banner", well, I don't know what is.