Sleuth Your Way Through This Sherlock Holmes Corn Maze

"the gap which opened into the cornfield" [STUD] 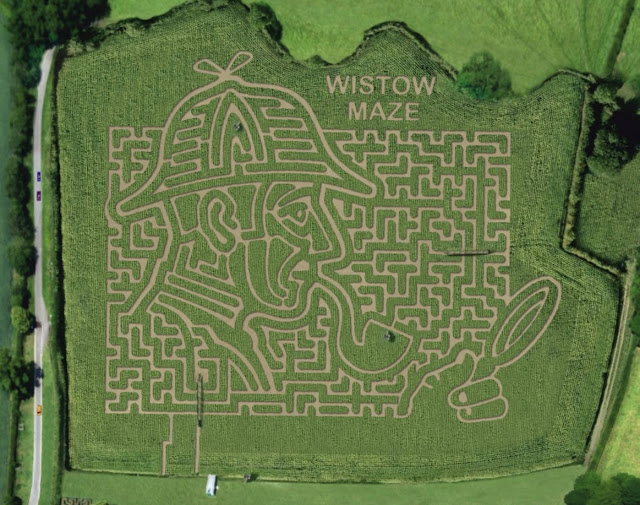 If you're anywhere near Leicestershire, England, the famed Wistow Maze is a seasonal wonder. And for Sherlockians, it's a must-see this year.

Every year, this maze takes on a different shape. It's  one of the country's largest maize mazes, set in 8 acres of living maize and sunflower crop.

This year, to mark the 130th anniversary of the first appearance of Sherlock Holmes in A Study in Scarlet, written by Sir Arthur Conan Doyle, the maze has been designed in the shape of Sherlock Holmes himself, with a 'Whodunnit' themed Quiz Trail hidden among the three miles of pathways.

Wistow Maze is a winner of Leicestershire's "Best Visitor Attraction" and attracts more than 20,000 visitors each year. The maze is open from Wednesday, July 19 to Sunday, September 3 daily, then weekends only until Sunday, September 17. Located near Wistow south of Leicester, the maze is open from 10:00 am — 6:00 pm. Parking is free and admission is £5.95 child, £6.95 adult, and a family ticket (2+2) is £24.

"I was very much surprised" [HOUN]

A quick word about the connection between corn and Sherlock Holmes. We must admit that we were skeptical that we would find a Canonical quote that would relate to the subject. Certainly, in The Hound of the Baskervilles, there's the mention of "the lodge gates, a maze of fantastic tracery in wrought iron, with weather-bitten pillars on either side," and about 90 instances of the word 'amazement' in the Canon. But we couldn't possibly recall a mention of corn in the Sherlock Holmes stories.

Corn (maize) has its origins in Mexico and is the most widely grown grain crop in the Americas, so we wouldn't expect to see corn to make an appearance in the Canon. And at any rate, when it came to food, Watson seemed to focus his attentions on main courses rather than side dishes. Beef, fish and fowl are typically what we think of along with "a group of ancient and cobwebby bottles" [NOBL] at dinner.

Of the visions of food that Watson brings us, there are but two vegetables which he named: yams / sweet potatoes ("I gave him directions to have several gourds of water and a lot of yams, coconuts, and sweet potatoes" [SIGN]) and peas ("the landlady babbled of green peas at seven-thirty." [3TSU]).

So imagine our joy when we turned the pages of A Study in Scarlet — partially an American story, after all — and found this passage:

"Jefferson Hope had the scanty provisions and water, while Lucy had a small bundle containing a few of her more valued possessions. Opening the window very slowly and carefully, they waited until a dark cloud had somewhat obscured the night, and then one by one passed through into the little garden. With bated breath and crouching figures they stumbled across it, and gained the shelter of the hedge, which they skirted until they came to the gap which opened into the cornfield."

In our business, it doesn't get much more exact than that.

If you do visit the Wistow Maze don't expect to return home with an edible Sherlockian souvenir. As mentioned above, this maze is maize, not sweet corn. Maize is typically used for animal feed.

However, if you really want to stretch a connection, you can always buy yourself a 'Missouri Meerschaum': a corn cob pipe. 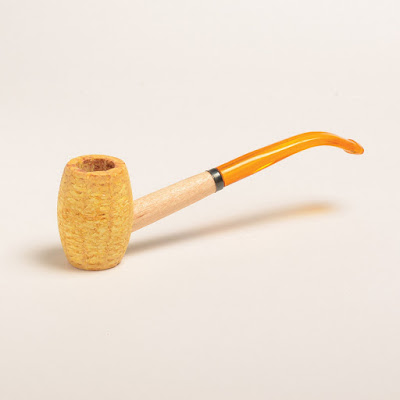 Thanks to Karen Murdock for the tip.