The Great Detective Pikachu — The Evolution of Holmes in Japan 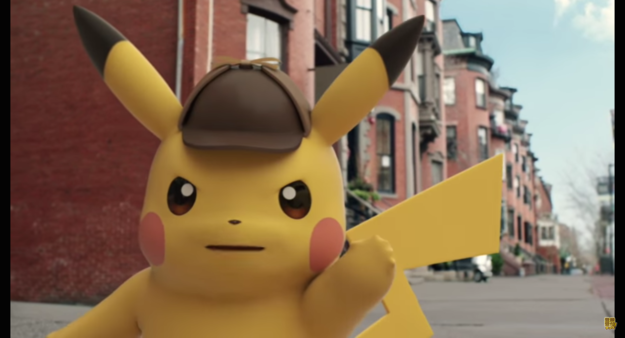 The likes of Basil Rathbone, John Barrymore, Jeremy Brett, and Benedict Cumberbatch are about to welcome an unexpected member to their ranks: Pikachu, the cuddly Pokémon mascot.


February 3 marked the Japanese release of Nintendo’s newest 3DS video game, Great Detective Pikachu: The Birth of a New Duo. No plans for an international expansion have been announced, but the game trailer, released on January 26, gained over 2 million views on YouTube, saw widespread coverage in Western media outlets, and even inspired a fan petition advocating for actor Danny DeVito to voice the title role in English.

Casting Pikachu as the celebrated detective may seem downright bizarre to fans of both Pokémon and Holmes, especially when combined with an initial viewing of the trailer. Not only are critical characters and plots from the Canon seemingly ignored, but crucial elements of the anime franchise have also been completely jettisoned. There are no traces of Pokémon World to be found, as the action unfurls in a modern-day city. Ash, Pikachu’s loyal friend, has been supplanted by a young man identified on the game’s website as Tim. The gaming icon himself has undergone the most drastic changes; donning a deerstalker cap, Pikachu now drinks coffee and speaks full sentences in a deep baritone that is a far cry from his traditional shrill cries.


These surreal changes make the experience of watching Great Detective Pikachu hilariously weird, but multiple viewings of the video reveal that the creators of this game have read their Conan Doyle. Sherlockians will be pleasantly surprised to discover that the trailer captures key atmospheric details straight from the Canon. Detective and assistant still prowl foggy streets cast with ominous shadows. A glimpse of our hero’s study reveals a distinctly Holmesian style of clutter, complete with stacks of paper, leather-bound books, and a microscope perched on a nearby shelf.

The ad even contains pointed nods to other prominent Sherlock adaptations; as Entertainment Weekly notes, the trailer’s music is remarkably similar to David Arnold and Michael Price’s celebrated score for their BBC television hit. An observer with knowledge of Martin Freeman’s role on The Office might wonder if it is purely a coincidence that the game’s Watson-esque character shares a name with the beleaguered Tim Canterbury. Reviews for the game are yet to come, but there are plenty of reasons to anticipate a loving, respectful, and clever result that simultaneously subverts and surpasses expectations for such a crossover.


But perhaps one might not be too surprised to see these two beloved characters united, as Sherlock Holmes has left an impression akin to that of Pikachu upon Japanese culture. While Pokémon has risen to prominence in the last twenty years, the Holmes stories have been in Japanese circulation since 1894, becoming so popular that they rank among the most requested books in junior high libraries, according to the Japan Sherlock Holmes Club. The Canon has also been incorporated into national learning materials, with certain stories used as examples of proper deductive methods in the “Textbook of Logic” studied by high school seniors.

Holmes's influence also goes beyond the classroom, extending into Japanese culture and media. The country boasts thirty Sherlockian societies, with its largest, the Japan Sherlock Holmes Club, supporting over one thousand members and eleven separate branches. Many Japanese authors have written pastiche novels and scholarly articles, many of which have seen publication in The Baker Street Journal. And of course, their scholarship has also been included in the first volume of the Baker Street Irregulars Manuscript Series, Japan and Sherlock Holmes.

Even before Pikachu’s arrival on the Sherlockian scene, the familiar English characters were adapted in popular television and comic series. Celebrated director Hayao Miyazaki, the mind behind later classics Spirited Away

and My Neighbor Totoro

, which saw the detective and his companions depicted as anthropomorphic dogs. Steven Moffat and Mark Gatiss’ Sherlock scripts have been the basis for an ongoing manga saga. And in summer 2015, film audiences saw Ian McKellan’s aging Holmes travel to post-war Hiroshima in Mr. Holmes

, which was itself an adaptation of Mitch Cullin’s excellent novel A Slight Trick of the Mind

Holmes warned Watson of the dangers of seeing without observation, and in this instance, it may seem easy to dismiss Great Detective Pikachu as a simple if confounding publicity stunt. But when one looks at how deep Holmes’ connections to Japan run, the pairing of Sherlock and Pikachu doesn’t feel like a pairing of opposites, but rather a unique meeting of cultural icons that is both amusing and satisfying for all involved parties.