"Bring me the books" [BLUE] 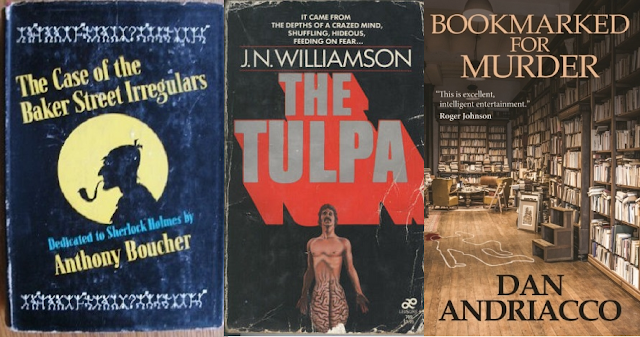 Sherlockians are about the most interesting people anywhere, so it's not surprising that other Sherlockians want to read (and write) books about them. Anthony Boucher, himself a prominent Sherlockian, met the demand brilliantly with The Case of the Baker Street Irregulars

in 1940. Maybe it's just the glow of that golden age, but I'm inclined to think that novel, just past it 75th anniversary, remains one of the greatest Sherlockian books of all.

leads its central character to visit the Bootmakers of Toronto. And Graham Moore's popular The Sherlockian is based in part on real events in the world of Sherlockian life and death and copyright. There have been others.

Unsurprisingly, most books about Sherlockians have been in the mystery genre — most, but not all. An odd little gem in the collection is the work of Jerry Neal Williamson, a Sherlockian (and Baker Street Irregular) from Indianapolis. His 1980 book The Tulpa is a supernatural thriller (one hesitates to use the word "potboiler") about a demon which, among other things, works bloody mayhem on a formal dinner of the Illustrious Clients of Indianapolis.

There should be room for books in other genres too. What about a romance novel (proposed title The Gasogene's Dark Desires)? Quite a number of real-life romances have grown out of Sherlockian activities, after all. What about a social problem novel (if anybody still writes those) about the great divide between the fangirls and the literati? Yeah, okay, I'm kidding. Sort of.

What is needed most of all, though, is a bibliography of the novels-about-Sherlockian-life that already exist. There are many I haven't listed here, and probably some I don't know about. I wish someone would get busy creating an annotated list of them.

All these observations bring us to the work of Dan Andriacco, a talented Sherlockian from Cincinnati who has turned out a series of accomplished mystery novels featuring Sebastian McCabe, an eccentric English professor and Sherlockian, and his brother-in-law Jeff Cody. He began with No Police Like Holmes

in 2011 and has followed it with five sequels (five and a half, really, counting an electronic short story). Information about them is at his blog, Baker Street Beat.

This commentary was originally supposed to be a review of the most recent novel, Bookmarked for Murder

, but plans changed when I happened to notice that it isn't really all that Sherlockian. McCabe and Cody do mention the sleuth of Baker Street occasionally as they go about their detection, and they do pay a visit to a thinly disguised Murder Ink bookstore in New York and notice its shelves of Sherlockiana, but that's about as authentic as it gets. For the most part, it's a novel about Sherlockians who happen to be doing non-Sherlockian things — something that, alas, most Sherlockians find themselves doing most of the time.

(Let it be noted, however, that it's still a very enjoyable book. The cover blurb quotes Roger Johnson, of the Sherlock Holmes Society of London, as saying that it's "excellent, intelligent entertainment", and he speaks the truth. One hopes that MX Publishing, which has issued all of Andriacco's novels, is finding a way to get them into the hands of the broader public of "cozy" mystery readers, not just those of confirmed Sherlockians. Surely they would approve of using a Maltese Falcon replica as a murder weapon just as much as we do.)

For serious Sherlockian content, the most on-target book of Andriacco's series is The Disappearance of Mr. James Phillimore, set among elite (and surprisingly murderous) British Sherlockians. But all of the McCabe and Cody adventures read like chronicles of the family of which we're happy members. Here's to much more Sherlockian fiction, from many more authors!
--