"lounging about his sitting room in his dressing-gown" [ENGR] 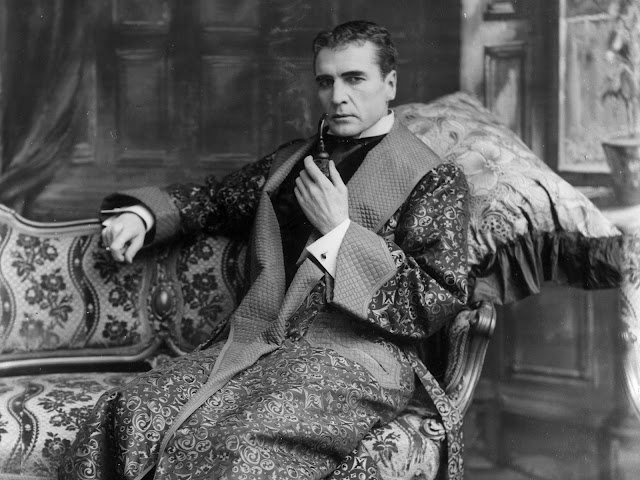 While the most famous pieces of Sherlock Holmes's wardrobe may typically be his deerstalker cap and Inverness cape — ironically two items never mentioned in the Canon — he's still recognized (although less well known) in his dressing gown. William Gillette (above) famously played Sherlock Holmes on stage some 1,300 times from 1899 to 1930 in a heavy quilted and silken number.

But what do we know about the dressing gowns mentioned in conjunction with Holmes in the original stories by Sir Arthur Conan Doyle? And how can you dress just as nattily as Holmes in the comfort of your own abode?

The first time (in the order the stories were published) we glimpse Sherlock Holmes in a dressing gown is in "The Man With the Twisted Lip," in which Watson describes the scene at the St. Clairs' home:


"He took off his coat and waistcoat, put on a large blue dressing-gown, and then wandered about the room collecting pillows from his bed, and cushions from the sofa and armchairs. With these he constructed a sort of Eastern divan, upon which he perched himself cross-legged, with an ounce of shag tobacco and a box of matches laid out in front of him." 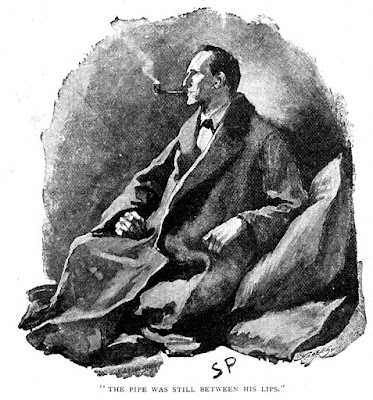 We next read of Watson discovering Holmes "lounging upon the sofa in a purple dressing-gown" in "The Blue Carbuncle," as Holmes examined Henry Baker's discarded hat. The pair were later interrupted by Peterson the commissionaire, with his amazing discovery of the precious gem in the crop of the goose he brought home to his wife. 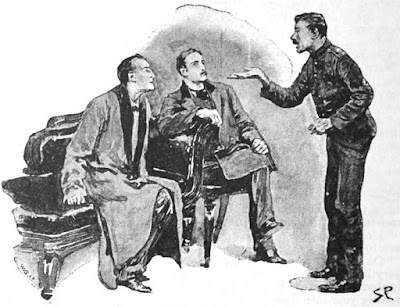 Other times when Holmes appeared in his dressing gown were days when he was sitting idly at Baker Street, such as in "The Engineer's Thumb" ("lounging about his sitting-room in his dressing-gown, reading the agony column of The Times"), "The Beryl Coronet" ("My friend rose lazily from his armchair, and stood with his hands in the pockets of his dressing-gown, looking over my shoulder."), and "The Bruce-Partington Plans" ("He was a different man to the limp and lounging figure in the mouse-coloured dressing-gown who had prowled so restlessly only a few hours before round the fog-girt room.").

There are instances when Holmes is roused to action and, still clad in his dressing gown, wakes Watson. In "The Disappearance of Lady Frances Carfax," "he rushed into my room. He was in his dressing-gown, but his pale, hollow-eyed face told me that his night had been a sleepless one." And in "The Resident Patient," Holmes has done everything but change into his coat: "At half-past seven next morning, in the first dim glimmer of daylight, I found him standing by my bedside in his dressing-gown." We see Holmes the quick-change artist in The Hound of the Baskervilles: "'Your hat and boots, Watson, quick! Not a moment to lose!' He rushed into his room in his dressing-gown, and was back again in a few seconds in a frock-coat."

Let's not forget the dressing gown as disguise for Holmes's mannequin in the window in two stories. First, Holmes's return in "The Empty House" led Col. Sebastian Moran to mistake the bust for his real target as "It stood on a small pedestal table with an old dressing-gown of Holmes's so draped round it that the illusion from the street was absolutely perfect." Later in the story, Holmes wore it himself: "He had thrown off the seedy frock-coat, and now he was the Holmes of old in the mouse-coloured dressing-gown which he took from his effigy." 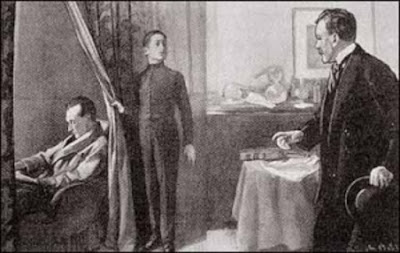 And later in "The Mazarin Stone," in an effort to fool Count Negretto Sylvius (and evidently Dr. Watson as well),

"There was a facsimile of his old friend, dressing-gown and all, the face turned three-quarters towards the window and downwards, as though reading an invisible book, while the body was sunk deep in an armchair."


Yes, the dressing gown was almost akin the effect of a superhero changing from street clothes to appointed costume as our hero readied himself for any occasion.

If you read the excerpts above, you'll note that there are three colors mentioned (and in most cases no color noted whatsoever). What are we to make of this? Some Sherlockians have assumed that Holmes owned more than one dressing gown (see "Sherlock Holmes's Dressing Gown(s)," S.F. Blake, The Baker Street Journal, Vol. 10, No. 2, April 1960, pp. 86-89 - available via the eBSJ).

But we prefer the ingenious and tidy solution developed by Christopher Morley, the founder of the Baker Street Irregulars. In his essay "Was Sherlock Holmes an American?" which first appeared in 1936, he mentioned the controversy


"such as, was Holmes's dressing gown blue, purple or mouse colored?" [Fn. "Elementary. This particular gown was blue when new. (The Twisted Lip) It had gone purple by the time of the Blue Carbuncle. During the long absence 1891-94, when Mrs. Hudson faithfully aired and sunned it in the backyard, it faded to mouse (The Empty House).

It was this deduction that led Morley to plan for the official colors of the Baker Street Irregulars. From The Standard Doyle Company


"I want to sell the BSI boys the idea of adopting colors for the club: to be shewn in either a rosette for the lapel, or even in a necktie. The colors, of course, to be
Purple, Blue and Mouse
these being the three shades through which Sherlock's dressing gown passed in its fadings. A fine rich purple; a pleasing "electric blue" (like the dress Violet Hunter had to wear in Copper Beeches!); and then a furry, soft, comfortable mouselike gray. . . . "

Then came the official announcement at the 1950 BSI Dinner. And the ties (and rosettes!) are still in use today, available to investitured Baker Street Irregulars.


Listen to us discuss dressing gowns and the color theory on Trifles:

Get Your Own Dressing Gown

If you like the idea of lounging about in a dressing gown like Holmes, there's good news: Derek Rose, purveyor of fine nightwear, once recommended Sherlock Holmes' Dressing Gowns (link now dead). Some of these styles were worn by Benedict Cumberbatch in Sherlock. Others are reminiscent of Sherlocks past.

[Fair warning: these are not for the faint of budget. But they are extraordinarily beautiful and we outline them below. Click each image to enlarge.]

You could start with the Lincoln II, a grey wool herringbone with navy trim. 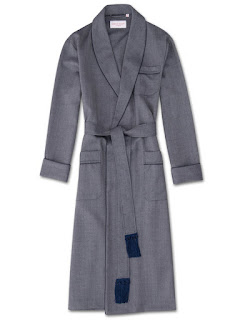 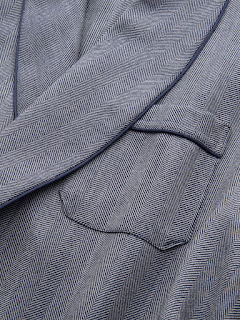 The Westminster is a navy blue number, in pure wool with a piped finish. 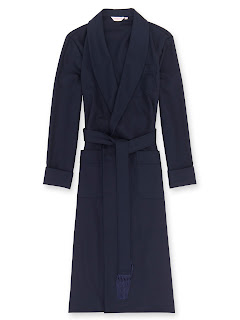 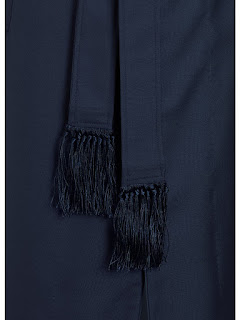 If looking like Benedict Cumberbatch is more your style, then you need the Woburn in striped blue silk for £308. 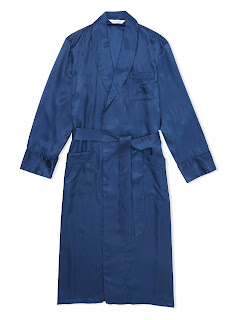 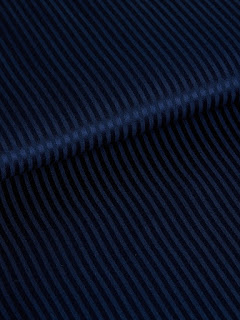 Or maybe you'd like to channel your inner William Gillette with the Verona 47, an embroidered pure silk jacquard robe. 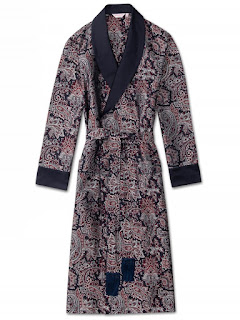 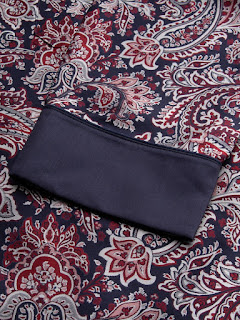 And for those who really want to go upscale, there's the Blandford, a merino cashmere check in charcoal. 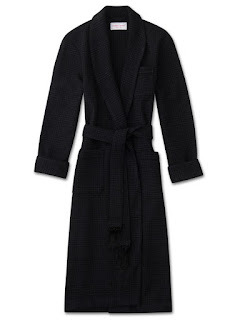 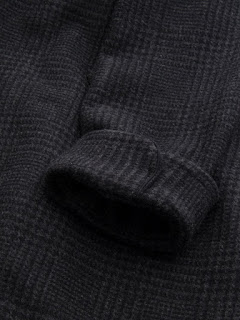 However, if you're prone to the reality of most budget-minded Sherlockians, there was once a way to get all three of Holmes's dressing gown colors for less than the cost of any of the Derek Rose gowns above. Admittedly, it's more of a robe than a dressing gown. If a few years ago, if you ventured to your local Costco Wholesale, you could have found plush robes in — get this — purple, blue and gray.