In his recent lambasting of Sherlock Holmes, art historian Noah Charney got in over his head. According to Charney, Holmes makes faulty assumptions and jumps too hastily to his conclusions. But if anyone in the January 26th Daily Beast pan "Is Sherlock Holmes a Good Detective?" is guilty of this, it must be Noah Charney, along with his principal source, Dr. Robin Bryant. When it comes to Sherlock Holmes, they see, but they do not observe.

After muddling about with the curious incident of the dog in the night-time from "Silver Blaze," and reaching the sort of conclusions that only faulty analysis can produce, Charney further snipes at Holmes's analytical abilities by means of a numeric puzzle.


"Based on the following numbers, what would you guess comes next in this sequence: 2, 4, 8, 16, X. Most people guess that the next number, X, will be 32, each number doubling. That’s a fair guess. But the answer to this particular question is not 32. The next most common estimate is 8, respondents concluding that the sequence will reverse itself. This is also reasonable, but incorrect. The correct answer is 31."

Charney opines that Holmes, like most people, would have guessed 32, but this is hasty generalization – he can have no inkling what Holmes may or may not have concluded [Silly - Holmes is not like most people. - Ed.]. And why, according to Charney, is the answer 31? Because this is a question about the number of points on a circle, also known as Moser's Circle Problem. The explanation, I suggest, is an attempt to validate a foregone conclusion – the very thing Charney accuses Doyle of doing on behalf of Holmes. Nothing in the evidence militates in favor of 31 as a better solution.

Here's another option: XX, assuming the letter X was not a variable, but a part of the sequence hiding in plain sight. We add the first and third numbers in the series and express the sum as a Roman numeral (10 = X). We then do the same with the second and fourth numbers (20 = XX). The series is 2, 4, 8, 16, X, XX… 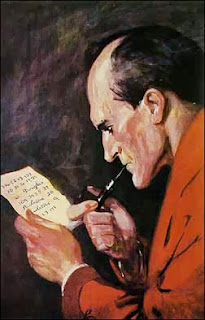 The answer could be 9, if we surmise the first four numbers correspond directly to letters of the alphabet. In that case, they spell "BDHP," obviously (by Charney's brand of logic) an abbreviation for Browning Detective Hi Power, a short-barrelled semi-automatic pistol made in the 1990s, in 9mm caliber – a BDHP9. Then again, if numbers stand for letters, letters could stand for numbers, yielding BDHP serial number 24. But perhaps this explanation is flawed, and BDHPX stands for Brian's De Havilland Philharmonic 10th symphony.

Charney declares 31 is the right answer because, "the answer we're looking for is 31." A finer example of begging the question might be difficult to imagine, and it comes from the man who accuses Doyle of unfairly setting Holmes up for success. "Because Holmes' fate was in the hands of Sir Arthur Conan Doyle," Charney criticizes, "he was set up to always succeed." Unless you count the multiple occassions when Holmes failed. And what of the real-life cases of George Edalji or Oscar Slater, wherein Doyle proved the innocence of two falsely accused men? Who are we to believe set Doyle up to succeed -- the pre-incarnate Benedict Cumberbatch?

What would Sherlock Holmes do?

How would Holmes have replied to Charney's number puzzle? Possibly he would have commented on "how dangerous it always is to reason from insufficient data." [SPEC] Holmes, according to Charney and Bryant, should consider "all the various ways in which a theft could occur without the guard dog barking." Was this kind of reasoning foreign to the detective who said, "I have devised seven separate explanations, each of which would cover the facts as we know them"? [COPP] After all, Holmes's theory about the dog's behavior is supported by a host of other clues that fairly shout "Inside job!" Notable among them are the curry, the cataract knife, the sheep, and the receipt in Straker's pocket, but these conveniently go unmentioned.

Says Charney: "Look at the problem from one angle only, and you risk getting it wrong. That is the most frequent logical pitfall into which Sherlock Holmes falls."

Says Watson: "Sherlock Holmes was a man, however, who, when he had an unsolved problem upon his mind, would go for days, and even for a week, without rest, turning it over, rearranging his facts, looking at it from every point of view until he had either fathomed it or convinced himself that his data were insufficient." [TWIS]

Next time, Charney should try the Sherlockian method. I've practiced it myself for years, admittedly with mixed results, but this much I have noticed: it tends to make one not only a stronger reasoner, but also a sharper observer of details. For example, I have observed that "Silver Blaze" is a short story, and not, as Charney asserts, "a novel."

In light of even half those accomplishments, "good" seems like an understatement.