You Can Own a Piece of Sherlock Holmes' Hollywood Wardrobe [UPDATED]

"He was dressed in a heavy gray suit" [VALL]


[This story has been updated since in first ran. See final paragraph. - Ed.]

One of the most iconic images in modern memory is of Basil Rathbone in his attire as Sherlock Holmes in the 1939 Universal film The Hound of the Baskervilles. For the modern era, it's the defining image of what Sherlock Holmes should look like. The action on the moors, the deerstalker cap and the heavy country suit that would be appropriate in such a setting - all are part of the atmosphere that lent themselves to creating the common image of Holmes in our collective minds.

Now, you have a chance to own part of movie history. TCM (Turner Classic Movies) has teamed up with Bonham's auction house for a monumental auction of Hollywood memorabilia. Titled "What Dreams Are Made Of: A Century of Movie Magic as Curated by TCM," it encompasses some of the most memorable and iconic costumes, scripts and memorabilia from Hollywood such as:

But the item that might set Sherlockians' hearts racing is none other than Lot 221 (we have be believe the curators knew what they were doing in placing an entirely appropriate lot number on it):

A Basil Rathbone Jacket from The Hound of the Baskervilles 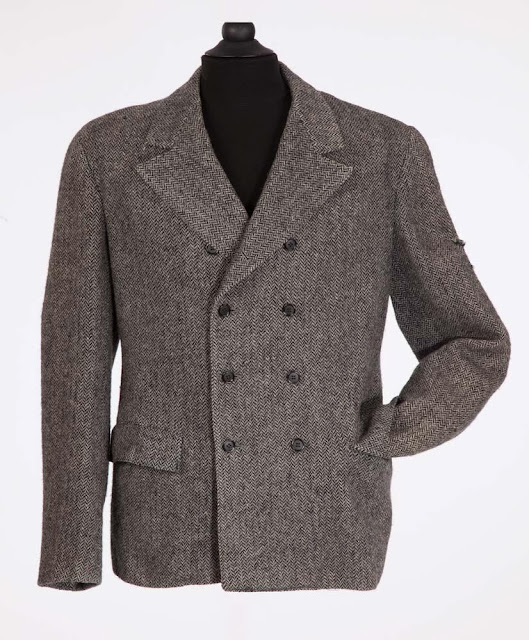 
Twentieth Century Fox, 1939. Gray and black wool tweed herringbone double-breasted jacket, bearing a green-lettered United Costumers Hollywood label with the typed inscription, "No. 713 / Basil Rathbone." Accompanied by a copy of the film.
Rathbone, playing the master detective Sherlock Holmes, wears this jacket while investigating the crimes on the moors with Watson (Nigel Bruce), and questioning suspects at the Baskeville home. The Hound of the Baskervilles was the first of fourteen films and 275 radio episodes pairing Bruce and Rathbone as Holmes and Watson, and is the best known film adaptation of Sir Arthur Conan Doyle's classic novel.

The estimate for this item is $12,000 - $15,000, which is relatively inexpensive, as the Casablanca Buick is slated for a half million dollars, for comparison's sake. 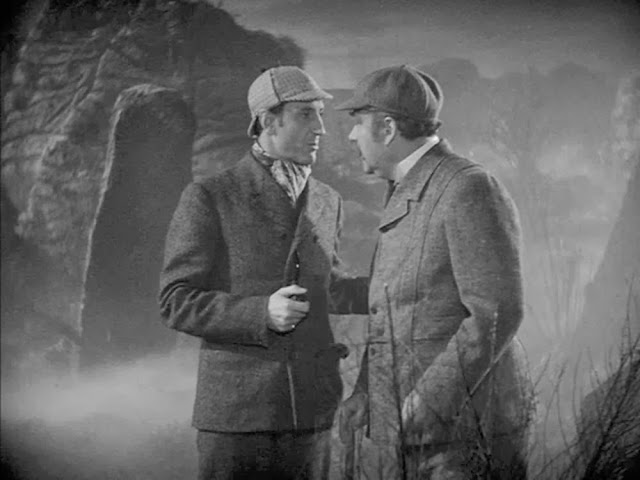 Astute observers may recall that actress Debbie Reynolds put her sizable Hollywood collection up for auction in 2011. In fact, the provenance of this item is credited to that auction: Profiles in History, Debbie Reynolds: The Auction, June 18, 2011, lot 115. At the time, the item sold for $9,500, plus $2,185 buyer's premium, taxes, fees, etc.

Should you not be satisfied with a single item for your Sherlock Holmes Hollywood wardrobe, Lot 222 is a tweed suit worn by Richard Greene as Sir Henry Baskerville in the same film. Its auction estimate is a respectable $1,300 - $1,500.

No word on whether the Inverness cape from The Adventures of Sherlock Holmes, which was originally sold for $50,000 (plus $11,500 buyer's premium, taxes, fees, etc.) will make another auction appearance.

The auction preview takes place at Bonham's in New York City from November 22 - 25, 2013 and the auction will be begin at 13:00 EST on November 25. More information at bonhams.com/tcm

Take a look through the online catalog. What are some of the items that you would fancy if you weren't constrained by a budget?