Did Sherlock Holmes Have Asperger Syndrome? 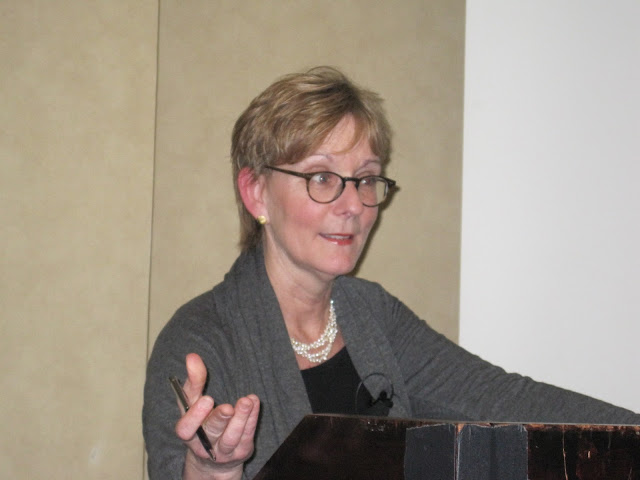 The BSI 2012 Weekend officially began with the Thursday evening Distinguished Speaker Lecture. In this case, we were honored to have Dr. Lisa Sanders join us.

Dr. Sanders has written a column for the New York Times since 2002 called "Diagnosis" and it is this column that was the basis of her becoming the technical adviser for House, M.D. She is also the author of  Every Patient Tells a Story. She joined us at the Manhattan Club on January 12 to give the talk "Is Holmes Crazy as a Fox, or Just Plain Crazy?"

Dr. Sanders opened by saying how thrilled she was to be around people who have the same passion that she does, for she has been a Sherlockian for most of her life In fact, it is her interest in Holmes - having devoured all of the stories and everything related to Sherlock Holmes - that led to her fascination with diagnosis, eventually leading to her becoming a physician after a mid-life crisis. She gave a nod to House, saying that he is not her ideal Holmes, but then "neither is Robert Downey. Jr.," to which the audience responded with a round of applause.

Dr. Sanders noted how important Sherlock Holmes was in her life. Her interest in the character opened her up to a new way of looking at diagnosis. She acknowledged the original inspiration behind Holmes, Dr. Joseph Bell (see "The Story of Dr. Joseph Bell" and "The Real-Life Inspiration Behind Sherlock Holmes"), who himself was a master diagnostician. So she began to try to piece together a differential diagnosis for Holmes's behavior. What is that odd behavior that Holmes displays toward Watson when they first met? In her lecture, Dr. Sanders said would try to diagnose it.

In his introduction to The Complete Sherlock Holmes, Kyle Freeman wrote that Holmes was bipolar. Dr. Sanders understands the basis for this differential diagnosis of bipolar disorder:  Holmes not speaking for days on end, contrasted with fits of high energy. "If that ain't bipolar disorder, what is?" she remarked.

She continued, citing the opening of The Sign of Four, with Holmes in a depressed state, using cocaine multiple times a day for many months. To continue, she posited that if one agrees with this diagnosis, one might subscribe to the theory of Moriarty as a figment of Holmes' imagination. After all, he never told Watson about his "Napoleon of crime" prior to "The Final Problem," and even then, Watson never saw Moriarty in the flesh; he took Holmes's word for it. But the mugging, bricks falling, carriage nearly running Holmes over - all could be classified as classic mania, with delusions and paranoia. But Dr. Sanders trusts the intelligence and medical observation of Dr. Watson enough to dissuade her that this was in fact the case.

Online article supposes Holmes was suffering from Attention Deficit Disorder. Supported by examples of hyper-focus, the constant self-medicating, either with drugs or activity. But Sanders pointed out that the American Psychological Association's Diagnostic and Statistical Manual (DSM-IV) states that such a diagnosis requires deficit of attention. There was very little evidence to support Holmes lacking attention.

Finally, Dr. Sanders settled on her diagnosis. "I think he has Asperger's Syndrome," she stated. A murmur went over the crowd. In justifying her diagnosis, she half playfully said "I'm a doctor, not a lawyer. That means I didn't leave anything out," looking toward some lawyers in the room, to a fit of laughter from the audience. The comparison of doctors and lawyers would continue to be a theme throughout the room on this evening.

She continued, saying that Asperger's Syndrome, which has been placed in the Autism Spectrum Disorder (ASD), has a number of characteristics that were present in Sherlock Holmes's behavior. Here we give you the proposed DSM-V diagnosis of ASD:


A. Persistent deficits in social communication and social interaction across contexts, not accounted for by general developmental delays, and manifest by all 3 of the following:
1. Deficits in social-emotional reciprocity; ranging from abnormal social approach and failure of normal back and forth conversation through reduced sharing of interests, emotions, and affect and response to total lack of initiation of social interaction,
2. Deficits in nonverbal communicative behaviors used for social interaction; ranging from poorly integrated- verbal and nonverbal communication, through abnormalities in eye contact and body-language, or deficits in understanding and use of nonverbal communication, to total lack of facial expression or gestures.
3. Deficits in developing and maintaining relationships, appropriate to developmental level (beyond those with caregivers); ranging from difficulties adjusting behavior to suit different social contexts through difficulties in sharing imaginative play and in making friends to an apparent absence of interest in people.

B. Restricted, repetitive patterns of behavior, interests, or activities as manifested by at least two of the following:
1. Stereotyped or repetitive speech, motor movements, or use of objects; (such as simple motor stereotypies, echolalia, repetitive use of objects, or idiosyncratic phrases).
2. Excessive adherence to routines, ritualized patterns of verbal or nonverbal behavior, or excessive resistance to change; (such as motoric rituals, insistence on same route or food, repetitive questioning or extreme distress at small changes).
3. Highly restricted, fixated interests that are abnormal in intensity or focus; (such as strong attachment to or preoccupation with unusual objects, excessively circumscribed or perseverative interests).
4. Hyper-or hypo-reactivity to sensory input or unusual interest in sensory aspects of environment; (such as apparent indifference to pain/heat/cold, adverse response to specific sounds or textures, excessive smelling or touching of objects, fascination with lights or spinning objects).


Dr. Sanders ticked off her list:
She didn't go through the entire list, but made a strong enough case with her facts. In addition, she took an Asperger's test that was developed by Simon Baron Cohen (you can take it too by clicking the link), answering as if she were Holmes. She scored 38 out of 50; anything over 30 is considered Asperger's.

In terms of evolution and why this disorder still exists today, Dr. Sanders cited advantages of being solitary, thinking on your own, seeing things differently, particularly in hunter/gatherer times. The notion of being a loner (fox) versus part of a pack (dog) could sometimes benefit individuals in the tribe who simply didn't go along with the group-think.

That concluded the lecture, which led to a few questions from the audience.

One attendee mentioned the book The Curious Incident of the Dog in the Night-Time and said that he himself concluded Holmes did not suffer from Asperger's because of some emotional expressions Holmes made toward Watson. He wondered if we need to look at the survey again. Dr. Sanders remarked that one of the things working against this diagnosis is that Holmes could understand the motivation behind people's behavior; whether or not he had empathy, he understood how emotions influenced actions.

A final question was regarding House - the attendee asking which came first, the creation of Gregory House or the influence of Holmes on the character/series? Dr. Sanders said that David Shore wanted to do a medical show, while Paul Attanasio wanted something related to Sherlock Holmes.