"then on Saturday" [HOUN] 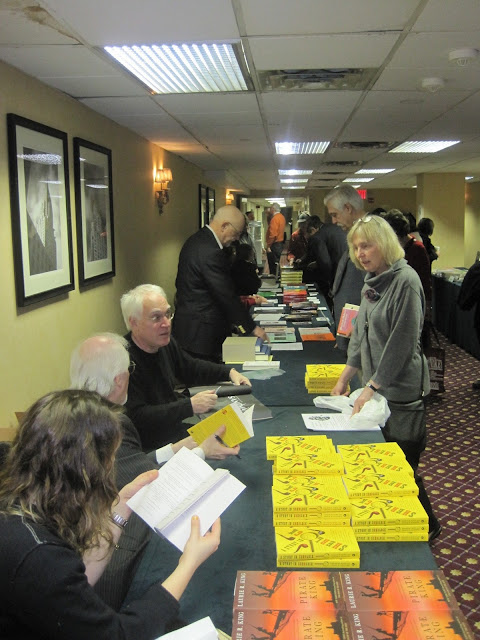 The day after the BSI dinner and Gaslight Gala can be a bit of a paradox for some people. For after the dinners, some attendees gather to celebrate well into the night. It's an unwritten tradition to keep the newest investitured members of the Baker Street Irregulars awake until at least 2:21 a.m. That's not too rare when you're in the city that never sleeps, but with the doors of the Vendors Room opening at 9:00 a.m. sharp (and Jerry Margolin always jockeying to be the first in), it can be difficult to rouse yourself from an otherwise groggy state.

This year's Vendors Room was packed with merchandise, from the new to the old and rare. The Baker Street Irregulars had its usual range of books available from the BSI Manuscript and BSI International series, as well as The Grand Game Volume Two, the continuation of the first volume edited by Leslie S. Klinger and Laurie R. King. In addition to the Grand Game compendium being completed, there was a very handsome Grand Game Limited Edition being offered for sale; you can order it online after March 30. There will be 100 box sets created, with gilt-stamped volumes, a companion index with an expansion of the origin of the Game and Ronald Knox, and a gold-stamped slipcase.

The afternoon turned toward West 44th Street as Sherlockians descended on the New York Bar Association for the reception and auction. As usual, Don Novorsky hosted the event and recognized the previous evening's newly-investitured Irregulars. Then, we we all treated to a fun little vaudeville routine by Jim Saunders and Henry Boote, who performed a Sherlock Holmes-inspired version of the old Mr. Gallagher and Mr. Shean bit. While we didn't record Jim and Henry, here you can have a look at what it looked like as performed by Charles Winniger and Al Shean:

Directly after the performance, it was time for the drawing of the raffle prize. All weekend, raffle tickets were sold to raise money for the John H. Watson Fund, a self-exhausting fund that is available to all Sherlockians (BSI membership is not required) who wish to travel to New York for the annual Baker Street Irregulars weekend but who may not be able to afford to otherwise attend. This year's raffle prize was donated by Maggie Schpak, BSI ("The Soup Plate Medal"), who works in metallurgical costuming. It was a replica of Lady Frances Carfax's Spanish diamonds, which you can see to the right.

Then it was time for another highlight of the weekend - the Sherlockian Year in Review, as given in verse by father and daughter team Al ("Inspector Gregory") and Betsy ("Lucy Ferrier") Rosenblatt. As usual, their observations and wit skewered events and individuals who made headlines throughout the year, and then turned toward the doings of the weekend. They even stopped mid-poem to break out in song to honor Henry Boote's Two Shilling award (sung to the tune of "Aunt Clara," of course).

The final programmatic event was Peter Blau's professional auctioneering effort to raise money for the Watson Fund. This year, the items included original posters from Sherlock Holmes: A Game of Shadows, a hand-turned wooden fountain pen made from wood salvaged from the barque Lone Star, original artwork by Charles Meyer, BSI ("Adloph Meyer") and a handmade wooden collector's cabinet made by Joe Coppola ("The Stranger's Room"). And in a last-minute surprise appearance, a Peter Blau-ish powder blue blazer worn the previous evening in the skit was offered up by Scott Monty. Peter and Scott stood side by side, taking bids for the jacket. The winning bid was a Canonical $221 and the buyer plans to donate it to the BSI Trust.

Afterwards, Sherlockians went their separate ways. Some caught trains, others joined up for an intimate dinner for 10 for Indian food, and many others got Lost in New York with a Bunch of Sherlockians at Pete's Tavern. The wrap-up brunch was hosted the following day by Lyndsay Faye at the Irish Rogue.

We have a few photos from the weekend. If you'd like to see them, there's a slideshow embedded below on the site. If you're viewing this on email or an RSS reader, please click through to the full article, or check out our set on Flickr.

If you weren't able to make it to the weekend this year, there's always next year! Set your calendar for January 10-12, 2013.

Do you have a memory or a first-person account of what happened at one of the events that we didn't cover? We'd love to hear about it in a comment below.