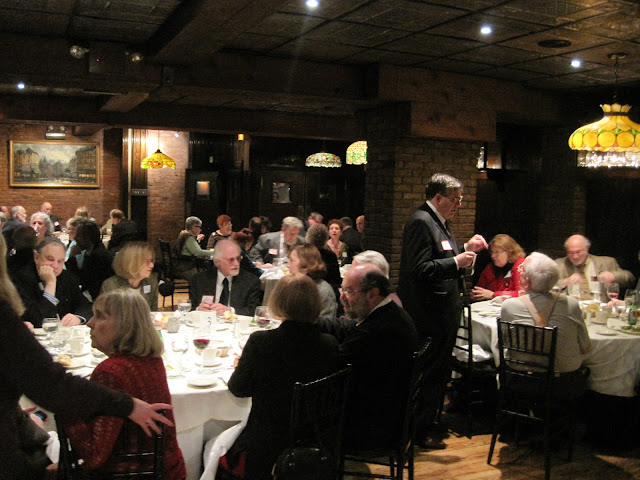 Friday is always a hectic day during the BSI Weekend. From impromptu breakfasts to early pilgrimages down to Tribeca to see Otto Penzler's offerings as the Mysterious Bookshop, there are plenty of mind- and waist-expanding opportunities to be had before running off to...lunch.

The Gillette Lunch has been in place for many years, having been first established in the early days of the BSI as an opportunity for those traveling from out of town to gather before the BSI dinner. Susan Rice and Mickey Fromkin have been running this event for a couple of decades, after it was handed down to them from Lisa McGaw.

Guests are welcomed to the quickly overflowing bar area of Moran's Chelsea restaurant (an aptly named or aptly selected venue, as the case may be) and conversation quickly rises, along with the temperature of the facility. But all is well as we wind our way into the substantial dining area and prepare for the welcome from Susan. We remember William Gillette of course, but also the founders and previous administrators. After a quick promotion of the Beacon Society - the group that promotes educating the young on Sherlock Holmes via the original stories - we dine.

After lunch come the skits. In this case were treated to two: a "Tonight Show" (c. 1895) rendition of Carnac the Magnificent; and the Friends of Bogey's of Baker Street giving us their fanciful interpretation of Sherlock Holmes on the Titanic. The iceberg even got a starring role.
We all wended our way to our respective hotels, some walking in the bracing cold in a futile attempt to burn some calories before attending another meal in three hours or so.

We attended the BSI dinner (as we have for the last 17 years), so we can only report on that. [Ed. note: if you attended the Gaslight Gala, we'd be delighted to have a writeup of what happened there. Please click on the Tip button at the top of the site.]

Prior to the dinner, it is always the custom to name "The Woman" of the year - typically the spouse of a BSI who has supported and encouraged her husband's work and in many cases who has been a co-conspirator in support of the BSI. This year it was Connie Keane, wife of Michael Keane who manages the BSI Publications. As it turns out, it was Connie who first encouraged Michael's interest in Sherlock Holmes, so as Leslie Klinger (who introduced Connie at the reception) put it, "Michael Keane would not exist if it weren't for Connie!" She did however put her foot down when Michael wanted to name their son Sherlock.

The dinner kicked off with the normal routine: our annual photograph taken with a 100 year-old camera, as well as welcome remarks from "Wiggins," the head of the BSI. He noted that this year marks a number of anniversaries: the 125th anniversary of the publication of A Study in Scarlet; the 175th anniversary of Dr. Joseph Bell's birth; the 120th anniversary of the birth of Basil Rathbone; and the 75th anniversary of the death of William Gillette. Mike also noted that the BSI Publications have produced an enormous amount of content in the last 11 years; in the last year alone, titles like Italy and Sherlock Holmes, Bohemian Souls, two Baker Street Journal Christmas Annuals, and two volumes and a special edition of The Grand Game.  In addition to those remarks, Wiggins also bestowed the Benefactor Award on Glen Miranker, who has very generously given of his time, materials and resources to support the BSI Trust. "For the sake of the trust," [MUSG] indeed.

Tom Francis, on behalf of the Trust, accepted a trove of materials that were donated by the Sherlock Holmes Collections of the University of Minnesota Libraries. Tom cautioned all attendees to save and donate their BSI correspondence, because "we don't know which of these clowns are going to become important" down the road. That got a great laugh from those assembled, but also served as a great reminder - especially in this digital age - that correspondence is to be treasured and preserved for future generations, to help tell our story.

The rest of the program unfolded splendidly, with toasts given by Lyndsay Faye, Andrew Solberg, Jim Saunders and Don Novorsky, and the reading of the BSI's Constitution and Buy-Laws by Costa Rossakis. Papers were read by Barbara Rusch, Burt Wolder and Bob Katz - or more appropriately, talks were given by Burt and Bob, who each performed the amazing feat of speaking without notes. As the theme of the evening was "His Last Bow," Burt covered the Chicago connection, with an interesting conclusion as to who Martha was (we'll won't spoil the surprise, as it's likely to appear in the Baker Street Journal - which you should subscribe to, if you don't already). And Bob shuffled off to Buffalo to look at the connection between England and New York in 1912.

In a bit of comic relief Paul Singleton and Scott Monty performed an updated "Two Thousand Year-Old Man" routine, modeled after the Carl Reiner / Mel Brooks collaboration. In this case, the Mel Brooks character looked and sounded an awful lot like Peter Blau.

Vinnie Brosnan recited the Musgrave Ritual and the audience replied with the appropriate answers. Otto Penzler took us back in time to the House of El Dieff as we remembered old Irregular Lou David Feldman, who was a bookseller extraordinaire. Otto recalled Lou's so-called "warehouse" where he kept many volumes; to Otto's surprise on his first visit, it was actually an apartment at 63rd Street and Park Avenue in New York.

In a surprise move, Wiggins called up Henry Boote and referred to him officially as the Music Director of the BSI before bestowing on Henry a well-deserved Two Shilling Award, given to Irregulars who have gone above and beyond in their service to the organization. Henry then took to the piano, where he performed a series of "His Last Bow"-inspired songs. He cleverly rewrote the lyrics to "Shuffle Off to Buffalo," "Chicago," and "When Irish Eyes are Smiling," followed by the traditional "Aunt Clara."

Before we moved on to the final portion of the program Wiggins called up Mary Anne Bradley to receive an Editor's Award for her 2011 Baker Street Journal Christmas Annual, The First Lady: Lenore Glen Offord.

And then, the moment we were all waiting for - the reading of the 2012 Honours List.

The evening concluded with Marsha Pollak reading Bill Schweikert's poem "A Long Evening with Holmes," and the assembled members and guests then disassembled.