"He Has a European Fame" [REDC] 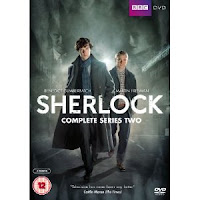 If you reside in the U.K., then you undoubtedly tuned in on January 1 for the BBC's airing of the long-anticipated second season of the popular and acclaimed series "Sherlock," which is now available for pre-ordering on Amazon.co.uk

(for European-compatible DVD players only).

We've been fortunate enough to see the episode and we're satisfied that the series will again be a success. It opens where last season left off, with Jim Moriarty taunting Holmes and Watson poolside until he's distracted by a more important issue. Back in Baker Street again, we see a parade of clients coming through the sitting room and Watson dutifully chronicling the interesting cases on his blog, with titles such as "The Geek Interpreter," which involves a trio of misfits whose comic book tales are coming to life and "The Speckled Blonde," in which a female corpse showed no cause of death other than some spots all over her body.

The two get into a spat about whose web site is more popular - Watson's, that attracts new clients, or Holmes's, that enumerates 240 (note the increase by 100) varieties of tobacco ash. Lestrade calls them "an internet phenomenon," after which the press are seen snapping photos and noting the attraction of "Hat-Man and Robin." In a funny aside, a number of times, Holmes gets flustered about Watson's blog counter being stuck at 1895...

We'll leave the synopsis at that for now, as the full 90-minute episode held many twists and turns, with appearances by Mrs. Hudson and quite a bit of Mycroft again. The ending was...well, we won't spoil it. :-)

This first episode was quite well done and really ties to the overall arc of the series, as we can see it developing.

If you're in Europe, you may pre-order season 2 of the BBC series "Sherlock" here. No word on U.S.-compatible availability at this time. We'll be ready and waiting when the U.S. premiere happens. And if you haven't yet purchased season 1, what are you waiting for?