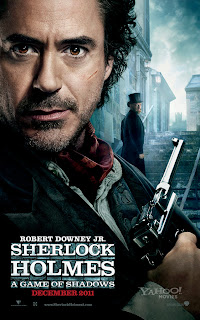 Some key points from the plot description on iTunes Trailers (click for various sizes), edited for our audience:

The duo return as the intrepid sleuth and his faithful friend and colleague, but this time face a more menacing villain: none other than the criminal mastermind Professor Moriarty (Jared Harris). When the Crown Prince of Austria is found dead, Inspector Lestrade (Eddie Marsan), suggests suicide. But Holmes knows better, deducing that the prince has been  murdered.  Holmes tracks the clues to the Diogenes Club, where - you guessed it - he and his brother, Mycroft (Stephen Fry) are toasting Dr. Watson on the night before his marriage. Enter the non-Canonical Sim (Noomi Rapace), a Gypsy fortune teller, who becomes another target in a the larger puzzle that Moriarty has crafted.

The investigation becomes ever more dangerous as it leads Holmes, Watson and Sim across the continent, from England to France to Germany and finally to Switzerland (!). But the cunning Moriarty is always one step ahead as he spins a web of death and destruction--all part of a greater plan that, if he succeeds, will change the course of history.

We're pleased to be able to bring you the first trailer of the sequel - a trailer, incidentally, where we're able to see Moriarty for the first time - with a beard. If you thought there were an overabundance of explosions in the first film, then hang onto your mouse.


And if you'd like a look at the posters, here are the current ones, courtesy of Yahoo! Movies.

Please consider visiting our sponsors (in the right column and footer of the site) from time to time. It helps defray the costs associated with running this site.
--
7/13/2011 02:21:00 AM
blog, movie, News, video