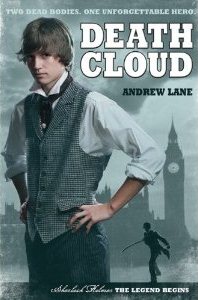 You're probably familiar with the 1985 film Young Sherlock Holmes

, but have you hear about the latest Young Sherlock Holmes book series by Andrew Lane?

Pictured at left is the cover of the new book by Lane titled Death Cloud. It is available for pre-order from Amazon.com and will be released on February 1, 2011. The book is intended for a younger audience (as one would gather from the Justin Bieber-like image used for the cover art), specifically grades 6-9. The product description on Amazon is as follows:

It is the summer of 1868, and Sherlock Holmes is fourteen. On break from boarding school, he is staying with eccentric strangers—his uncle and aunt—in their vast house in Hampshire. When two local people die from symptoms that resemble the plague, Holmes begins to investigate what really killed them, helped by his new tutor, an American named Amyus Crowe. So begins Sherlock’s true education in detection, as he discovers the dastardly crimes of a brilliantly sinister villain of exquisitely malign intent.

And the School Library Journal gave the book a starred review:

Sherlock Holmes, 14, is expecting a quiet summer, relaxing with his family after a difficult term at school. However, political upheaval in India, his mother’s illness, and brother Mycroft’s position in the Foreign Office result in Sherlock being sent to distant relatives instead. Adapting to life at Holmes Manor in Farnham, he makes friends with a village ruffian and is soon given an American tutor to keep him out of mischief. When Sherlock and Amyus Crowe, the tutor, discover a body covered with mysterious swellings, they are thrown into a conspiracy of chemicals, knives, and money. Over the course of his investigation, Sherlock is kidnapped twice by pale and crippled Baron Maupertuis, once after a brutal boxing match, and the second time while with beautiful Virginia Crowe, daughter of Amyus. In their final confrontation, Sherlock and Virginia discover the Baron’s plot to bring down the whole of the British Empire. Lane successfully blends the traditional Holmesian confidence with the teen’s awkward self-consciousness. The vulnerability of the character is well illustrated through his relationship with Mycroft, as well as his friendship with Matty, the young orphaned longboat operator. While the crush on Virginia seems a bit shoehorned in, her character does provide some needed humor. Occasionally the action overwhelms the investigative components, but the narrative still flows smoothly. A menacing villain and an unexpected twist make for a thoroughly engaging read that will keep readers turning pages. Now, it’s just a matter of waiting for the next tale.

The author is particularly interested in this period of Holmes's life, as little attention has been given to it previously, either by Conan Doyle or by subsequent authors. Expect to see more in this series which we hope will bring young people to Sherlock Holmes.

Please consider visiting our sponsors (in the right column and footer of the site) from time to time. It helps defray the costs associated with running this site.
--