Graphic Adventure of Moriarty on Kickstarter 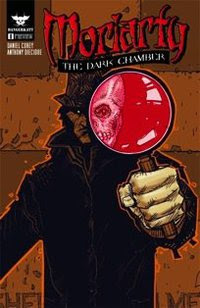 Here's an interesting project that might be worthy of your support. Kickstarter is a site that allows you to peruse small budget creative ideas that need funding. The notion is, if enough people chip in, the project will become a reality.

We've been made aware of a Sherlockian project that needs funding: Moriarty: The Dark Chamber is a "graphic adventure" that is being proposed on Kickstarter. The publication is an upcoming graphic novel from DangerKatt Creative Studio, written by Daniel Corey, with art by Anthony Diecidue and letters and graphics by Dave Lanphear.

According to the project leads:


MORIARTY is going to be a three-chapter trade publication. Chapter #1 is complete, but we need your help to fund Chapter #2. The money received from backers will aid in production, covering the cost of art, letters and final assembly. The individual chapters of MORIARTY will debut online, and will go to print when the entire book is complete.

Here's the trailer for the project:
And a synposis:

It is the dawn of World War I, and Sherlock Holmes has been dead for twenty years. Professor James Moriarty is a lost man when he is approached by MI5 and blackmailed into finding Holmes' long-lost brother, Mycroft. What at first appears to be a routine case leads to a web of intrigue that involves a psychic box, a woman from his past, and a new villain that threatens to be greater than he ever was.

Will he unravel this complex mystery and reclaim his former glory as the world's greatest criminal mastermind, or will he fade into obscurity?

If you're interested in seeing some of the sample art, their Facebook Page has an album full of it.

Here's where you come in: the team needs to raise $3,700 in the next 40 days or so. So far, there have been 11 contributions made and $400 raised. If this is a project that you would like to see succeed, please consider contributing. There are great incentives if you volunteer a donation, including copies of the final graphic novel, downloadable artwork, and signed sketches by artist Anthony Diecidue.

In addition to donating, let's do something remarkable: let's see how viral we can make this effort. Share this link with everyone you know. Email it. Tweet it. Put it on Facebook, discussion boards, forums, etc. Let's see how far and wide we can spread the word to help get these guys off the ground. That "plus" sign in the bottom bar or the green "Share This" icon below will help you with that.