"This Account of You We Have From All Quarters Received" [SCAN] 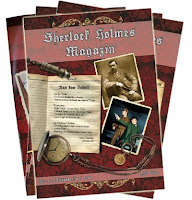 In our inbox over the weekend, we found a note from the publishers of Sherlock Holmes Magazin, a German publication. We're pleased to say that they were a little more courteous to their verbs than the legendary Count von Kramm as they reminded us of the existence of their publication and of the latest installment.

The German Sherlock Holmes magazine is now in its fourth issue and is clearly popular, as the first issue from August 2009 has sold out, and the second issue is nearly sold out. To give you an idea of what made it so popular (aside from the notion of a first issue being something of a collector's item), here are some of the topics from that first appearance (very loosely translated - forgive our crude skills):

In the June 2010 edition, comprising 32 pages of full color, we have the following to look forward to:


There is sure to be something for everyone here - both collectors and active Holmesians in Germany as well. The publishers are the Deutsche Sherlock Holmes Gesellschaft and the subscription rates are as follows: 19 € to the UK, 27 € within the EU, 32 € worldwide. You can order here.


Related items for you Germanophiles: