"The Giant Rat of Sumatra" [SUSS] 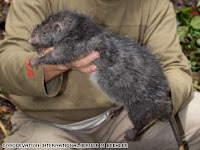 Sometimes you come across a news item that's just too good to be true. Or in this case, too Canonically accurate. It's almost frightening.

In The Sussex Vampire, Holmes mentions that the Matilda Briggs "was a ship which is associated with the giant rat of Sumatra, a story for which the world is not yet prepared." And so it went, that the Giant Rat of Sumatra became one of the most highly recognized of the apocryphal tales - the unrecorded cases of Sherlock Holmes.

So imagine my surprise when I saw a headline on CNN.com today that not only included the Rattus horribilis, but also a mention of one of Sir Arthur Conan Doyle's other enduring tales: Giant rat found in 'lost world'.

In this case, the Lost World

in question is not some South American plateau, but none other than Indonesia - which coincidentally includes Sumatra. In this case, the rodent was found in the Foja mountains in the eastern Papua province, which is not all that far away from Sumatra. Two new species were discovered in an area that is rarely visited by humans - and one of them happened to be a "giant rat" that is about 5 times the size of a normal city rat. I don't know you, but I think city rats are fairly large to begin with. This is approaching being a R.O.U.S. (Rodent Of Unusual Size).

I love it when our little hobby becomes fodder for the headlines and something that was written about nearly 100 years ago becomes fact. I know Conan Doyle was into the psychic phenomena, including spiritualism, but this is just plain uncanny. As Sherlock Holmes himself said, "life is infinitely stranger than anything which the mind of man could invent." ['A Case of Identity']

According to the article in Science Daily (Dec. 17, 2007) quoted in an email from Gideon Hill, "The giant rat is about five times the size of a typical city rat. With no fear of humans, it apparently came into the camp several times during the trip."

No fear of humans, eh? This should get the pasticheurs going.

Scott...your second to the last paragraph drops off at...

BTW, I saw this earlier and it was indeed quite freaky.
--Ann