"The Falls of Reichenbach" [FINA] 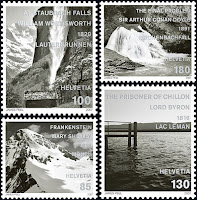 Aside from 221B Baker Street, one of the most well-known landmarks in the Canon is the Reichenbach Falls, where Sherlock Holmes and Professor Moriarty meet for hand-to-hand combat to settle, as Holmes put it, "the final discussion of those questions which lie between us." While most (if not all) of you know the outcome, I'm not going to issue any spoilers here.

I don't know if you've read The Final Problem recently, but I highly recommend going back to rereading it if you have the chance. Aside from the suspense of Holmes being hot on the trail of Moriarty and his gang (and vice versa), we're afforded what I think is some of Watson's best writing as he describes the Continental settings which he and Holmes experience. The other story that contains some of his finest descriptive prose is, for my money, The Hound of the Baskervilles. For example, as they get to Reichenbach Falls:

It is, indeed, a fearful place. The torrent, swollen by the melting snow, plunges
into a tremendous abyss, from which the spray rolls up like the smoke from a
burning house. The shaft into which the river hurls itself is an immense chasm,
lined by glistening coal-black rock, and narrowing into a creaming, boiling pit of
incalculable depth, which brims over and shoots the stream onward over its
jagged lip. The long sweep of green water roaring forever down, and the thick
flickering curtain of spray hissing forever upward, turn a man giddy with
their constant whirl and clamour. We stood near the edge peering down at
the gleam of the breaking water far below us against the black rocks, and
listening to the half-human shout which came booming up with the spray
out of the abyss.

Like the Grimpen Mire in The Hound of the Baskervilles

, "the setting is a worthy one" for the events that unfold.

Well, new events have unfolded that will be of particular interest to the philatelists out there, thanks to Swiss Post. They have released four stamps with an English literary connection as part of a series portraying Switzerland through the eyes of foreign artists. Naturally, Sir Arthur Conan Doyle gets a nod there for his work with "The Final Problem." Joining him are Mary Shelley, William Wordsworth and Lord Byron. The site swissinfo has the full details on their respective contributions that included the Swiss landscape.
9/17/2007 12:06:00 PM
blog, collecting, Conan Doyle, News, travel