"the doctor will meet me here." [RESI] We know there are quite a few Sherlockians out there who, in addition to their passion about Sherlock Holmes, have an active interest in another character, namely Dr. Who.

For those of you not familiar with the good doctor, let me give you a (very) brief thumbnail: he's an extremely intelligent time-traveler who flits through time and space to solve problems. Originally aired on the BBC and played by a string of actors, including Tom Baker as the Fourth Doctor, who went on to portray Sherlock Holmes in a very questionable production of The Hound of the Baskervilles. 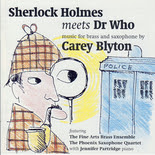 But the reason we're mentioning Dr. Who today is because a new album has just been (re)released: Sherlock Holmes Meets Dr. Who on Amazon.  Let's just say we're intrigued enough to mention it here.

The music, composed by Carey Blyton, is an eclectic mix of saxophones and brass, as played by the Phoenix Saxophone Quartet and The Fine Arts Brass Ensemble. It features 32 tracks in its entirety. Here are some sample tracks:

There are a number of other tracks related to Dr. Who, but we can't comment on the relevance of those. From a musical perspective, it's definitely worth adding to your collection.
--

It's a fun album, and I'm glad to know that it's been re-released (it was first issued about eighteen years ago). The "Doctor Who" music was written for the Jon Pertwee serial "The Silurians" in the 1970s, if I remember rightly. I recently had the chance to watch the 4-part Tom Baker "Hound of the Baskervilles" again, and have to admit that my initial harsh opinion has mellowed considerably. It's much better than I remembered! (You probably know that Will Knightley, who played Dr Mortimer, is the father of the lovely and far more famous Keira Knightley...) Incidentally, Peter Cushing played the Doctor in a couple of adequate feature films in the 1960s, and Richard E Grant played him in an online animated broadcast - so three actors have played both Sherlock Holmes and the Doctor! And there are four or five Doctor Who novels with Sherlockian & Doylean connections, of course.