"knowledge which would astonish his professors" [STUD]


It seems that every time we turn around lately, we're hearing of Sherlock everywhere. In addition to popular culture references which continue to abound, there are a number of Sherlockians who are doing their part to keep the Master's memory green and are getting some well-deserved press in return.

In particular, two of our good friends and fellow Baker Street Irregulars have recently appeared in print for their respective activities. 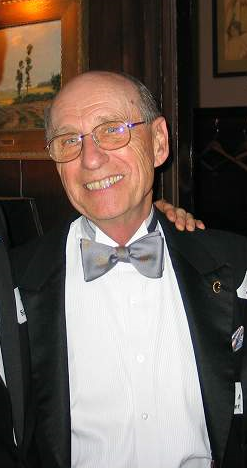 The first, Al Silverstein, BSI ("Professor Presbury") is a longtime member of the Cornish Horrors of Rhode Island and a recently retired professor of psychology. He is using his free time to give lectures about Sherlock Holmes. He recently spoke at Yale and at the Cranston Historical Society, which was highlighted in A truly Sherlockian evening by the Providence Journal. We've had the pleasure of hearing Al speak many times - it is an experience well worth having - and of enjoying humorous and intellectual conversations with him during many society events. It's part of what makes the game so fun for us.

Similarly, Andy Solberg, BSI ("Professor Coram"), who is the current Gasogene of Watson's Tin Box of Ellicott City, was interviewed for The Baker Street Irregulars at home in county, which also included quotes from Paul Churchill, BSI ("Corot") and Cliffe Hichar. The society was noted for it laid back and comfortable attitude as well as its scholarship. Under Andy's guidance, WTB has sponsored an essay contest to encourage middle school children to read the Sherlock Holmes stories. Although Andy is a relatively recent friend acquired from the BSI Weekend attendance over the last decade or so, he's one of our closest Sherlockian friends and advisors. His work with his local school system is simply great stuff and he's quite the scholar, as his Baker Street Journal articles prove.

It's entirely coincidental, but worthy of note nonetheless: these two articles appeared on the Web on the same day, and both of these BSIs are named after professors in the Canon. And what's more: each of them has been a co-author of an article in the Baker Street Journal that has won a Morley Montgomery Award for the best piece of Sherlockian scholarship in the BSJ for that year.

We're sure there are lots of these types of activities going on around the world. Do you know of anyone doing something? Leave a comment below and tell us all about it!