Episode 08: To Keep the Memory Green 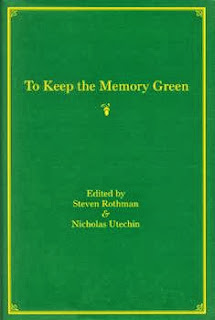 Editors Steven Rothman and Nicholas Utechin join us for a chat about a book they have co-edited: To Keep the Memory Green, some recollections from the life of Sherlockian/Doylean scholar and collector Richard Lancelyn Green. We also hear about their respective experiences as editors of the Baker Street Journal and the Sherlock Holmes Journal and the formation of the Quartering Press.

Topics in this episode:
1:30 Listener audio comment
4:30 Nick & Steve give some perspective on their editorial experiences
14:29 A bit about Richard Lancelyn Green
17:20 The genesis of To Keep the Memory Green
21:12Steve recalls memories of Richard, a bus station and plastic carrier bags
23:17 Nick harkens back to the early 1970s and an Oxford connection with his professional Sherlockian friend
24:57 The Baker Street Irregulars and the Sherlock Holmes Society of London join forces
27:00 Quartering together – the fruits of labor
30:35The impetus behind the project – capturing the essence of a “one-off”
40:14 An alternative to the Editor’s Gas Lamp: Richard Lancelyn Green’s introduction from The Adventures of Sherlock Holmes (Oxford annotated edition)
49:24 Final thoughts on Richard’s contribution
52:08 Burt springs a question on Scott
54:32 Hunting through old bookshops
56:10 Scott’s inspiration for collecting – from a movie


Links mentioned in the show: