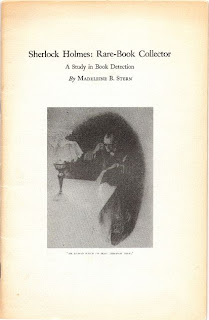 Sad news from the worlds of Sherlock Holmes and book dealers: antiquarian/rare book legend Madeleine B. Stern has passed away in New York City at the age of 95. In her obituary, she was called "a prominent rare-book dealer, biographer and literary sleuth," which gets at the heart of one of the subjects she tackled in 1953.

Sherlock Holmes: Rare-Book Collector is her cornerstone publication on Sherlock Holmes' book collecting habits. Published in 1953 by the Bibliographic Society of America, she took her literary sleuthing to heart as she applied her knowledge and love of books to the sleuth of Baker Street. Although she claimed "Sherlock Holmes was as canny and secretive in his book collecting practices as in his methods of detection," she concludes

A loving eye can restore them all: the booksellers of old, the keen-eyed detector who wanders from shop to shop in search of a quarry in calf, even the books themselves, as we brush off the dust of the past, assemble them once again, and restore them to their rightful shelves in the treasure room of Baker Street.

Madeleine Stern was as shrewd in her business acumen as she was in her bookish deductions: 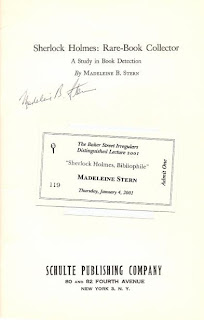 she partnered with her life-long friend Leona Rostenberg to run Rostenberg-Stern Rare Books. I remember the excitement I had in the fall of 2000, when I received my BSI Weekend information pack, to find that Ms. Stern would be giving the Baker Street Irregulars Distinguished Lecture for 2001. She brought Ms. Rostenberg with her and spoke to us about reconstructing Holmes' library - the process of writing the above mentioned book (the article is available in the Summer issue of the Baker Street Journal, Vol. 51, No. 2).

She said that she received many letters from major Sherlockians, including Anthony Boucher (one of writers behind the Rathbone/Bruce radio series), Vincent Starrett, and Christopher Morley, which was her favorite. She was very gracious and took the time to answer questions and sign some books. You'll see mine proudly displayed here.

The January 2001 BSI Weekend is a blur for me because that is the year I received my investiture into the group, so I hope you'll forgive my lack of additional detail. If you'd like more information on the life and career of Ms. Stern, you may see her full obituary, courtesy of the New York Times.
8/27/2007 12:10:00 AM
blog, BSI, collecting, News