"a wonderful mixture of the Saxon and Latin" [SUSS] 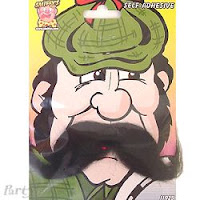 This comes from the sad, but true department. If you've been lucky enough to attend the Baker Street Irregulars' Silver Blaze festivities every other year, you are probably familiar with Professor Moriarty's restaurant. Well, the next time you walk in, be sure to say

Because Professor Moriarty's is being sold. According to the article from the Albany Times-Union, "The 23-year-old restaurant and tavern, known for its cozy cherry-wood walls and English pub-like ambience, will be purchased by a former California businessman who wants to open an upscale Mexican eatery."

To which we can only say, "Ai yai yai!" We have to wonder if they're working on renaming the entrees? Here are a few suggestions:
Have you got others to add? Leave a comment with your ideas. Ole!

* Translation: "All that I have to say has already crossed your mind." [FINA]

What about Master Criminal Quesadillas, served with plenty of Tabasco sauce and chili-peppers?

Jan & Nora - those sound delicious! And Nora, thanks for the Spanish correction. I'll fix it.