Mutant Dog or Hound from Hell?

"Had I not known this legend" [HOUN]


A recent headline "Hybrid mutant found dead in Maine" was arresting on its own, but the accompanying photograph was equally as alarming.

Some sort of a beast was found dead on the side of the road in Maine, after having been hit by a car. Officials think it may have been a cross between a wild dog and a coyote or a wolf. I was immediately reminded of The Hound of the Baskervilles by certain quotes in the story.

Compare the news quotes with actual quotes from the Canonical tale in which Mr. Sherlock Holmes faced down the hound:

"may be the mysterious creature that has mauled dogs, frightened residents and been the subject of local legend for half a generation."

"it is a statement of a certain legend which runs in the Baskerville family."

"It was evil, evil looking."
"For the past 15 years, residents across Androscoggin County have reported seeing and hearing a mysterious animal with chilling monstrous cries and eyes that glow in the night."

"I assure you that there is a reign of terror in the district..."

"...its eyes glowed with a smouldering glare.." 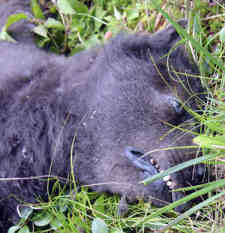 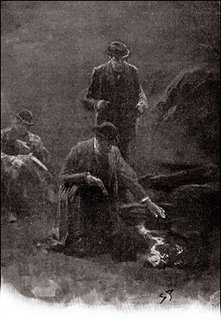