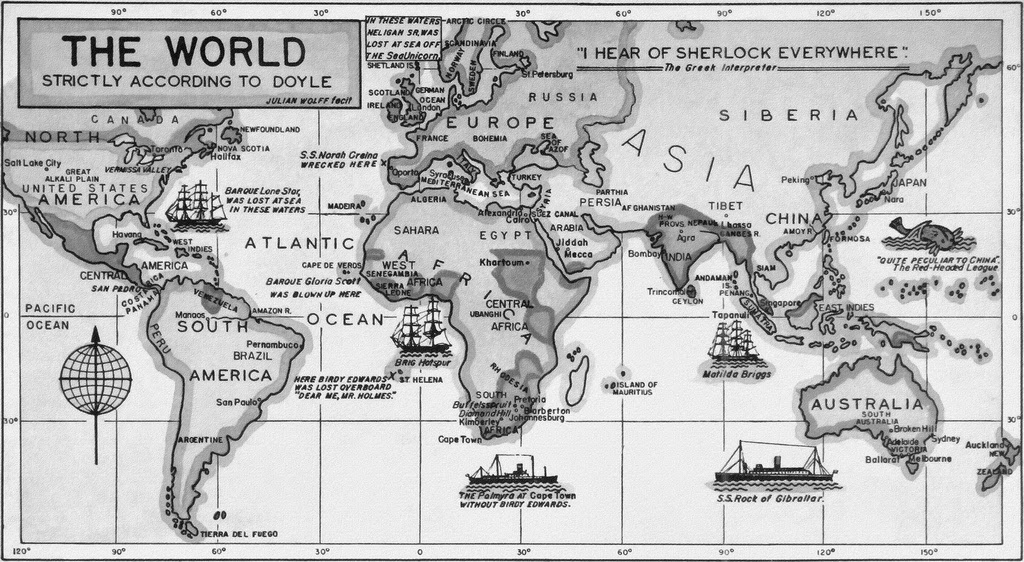 Brad Keefauver noted our Sherlockians Around the World Frappr map (now defunct) unveiling on his blog, The View of Sherlock Peoria, with a nod to the influence the Internet has (and continues to have) on Sherlockiana.

He notes that chief among the Sherlockian tenets is the ability to share one's treasures with one's friends - and this is exactly what the Internet is designed to do! It's certainly what the I Hear of Sherlock Everywhere is meant to do.

While it is tempting - and downright frightening - to think of a paperless world, to the degree that the Web allows us to share insights, discoveries and thoughts at the speed of light, it makes the Sherlockian world a smaller, better place.

Certainly, nothing can take the place of holding that long sought-after book, a rare manuscript, or even a chocolate bust of Sherlock Holmes in one's hands - the tactile nature of collecting is truly visceral at its core. But for those who cannot afford to travel to remote libraries, aren't aware of ongoing public auctions, or don't know private collectors, the electronic transmission of information is the next best thing to holding a valuable in one's hands.

Some Sherlockians may view this wide dissemination of knowledge as counter to the very essence of what Christopher Morley was trying to create with the Baker Street Irregulars - that "whiskey and sodality" among a select few - but early members of the BSI created pamplets, booklets and publications to entertain and edify each other, originally at the annual dinners, then in print beyond that. And, as Brad notes, their correspondence was legend. But thanks to these writings in which they shared their experiences, we can enjoy them as well.

The journey of Sherlockian discovery is a profoundly personal one. The ongoing series in The Baker Street Journal, "My First Meeting with Sherlock Holmes" is a testament to the fact that each of us has come to enjoy the detective and the Game in vastly different ways. And most of what you'll read, beyond the authors' love of reading, will inevitably come down to their appreciation for friendship. Morley referred to the Canon as "a textbook of friendship," as it illustrated a wonderful relationship between Holmes and Watson. For thousands of people around the world, the Canon serves as an introduction to friendships in Sherlockian circles which extend many generations and families.

In the Twenty-First Century, everyone is able to share his experience or her discoveries in a way that can be accessed and distributed by all. It is my hope that this blog will continue to serve as a powerful and unique way for me to continue to share my own Sherlockian journey as it unfolds.