Conan Doyle's Undershaw May Be Destroyed


In 1897 Sir Arthur Conan Doyle made his home in Surrey, where his personally-designed house Undershaw was completed. It is while he lived there that he wrote The Return of Sherlock Holmes and The Hound of the Baskervilles.

From 1924 to 2004, the 36-room house was a hotel, but now it is in danger of losing the charm and details that have been part of the home for over 100 years, as developers are considering destroying it to make way for three homes to be built on the site of the house, plus another on the grounds. The full article is available from the Telegraph. 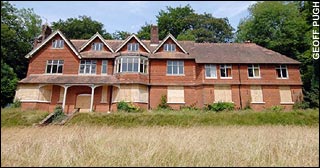 
"This was the only house that Conan Doyle had built for himself. To gut it will destroy the integrity of the important building and all its connections."

From Nick Utechin (editor of The Sherlock Holmes Journal):


"No thought appears to have been given to the incredible importance Conan Doyle has in popular literary culture. We are not saying the house needs to be maintained exactly as it was, but it would be nice if something could be kept or if the public were able to look around it."

Both the Sherlock Holmes Society of London and The Victorian Society are doing their part to save the property.