Today's edition of The Hindu has a book review of Experiments in Advocacy: A Colossus in the Courts of Justice, The Life and Times of Dr. Kailus Nath Katju. The book is a collection of Katju's essays and speeches, with more than a slight nod to one of his heroes, Mr. Sherlock Holmes:

In his presentation of cases, none other than the detective of all times, Sherlock Holmes influenced him. "He [Holmes] always insisted upon close observation of detail and proper inferences, and those rules I found invaluable and indeed a key to success in many mysterious cases which I was briefed to argue in court of appeal." The master detective finds a reference throughout the book with two special chapters dedicated to him. "Sherlock Holmes in India" narrates three criminal cases that prove the adage "truth is stranger than fiction."

In "The Sherlock Holmes Method Applied in Court," Katju describes how he developed his own powers of observation, deduction and inference on the lines indicated by Holmes to Watson. 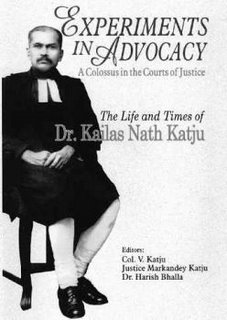