Nominations Are Open for the Susan Rice Mentorship Award

Every profession, every hobby needs mentors. A mentor's job is to help new arrivals understand the context and meaning of the organization they're stepping into. Mentors helpfully point out the guardrails, endlessly encourage curiosity, and consistently communicate the worth and potential of those in their charge.
Mentors are leaders.
And we were blessed to have such a leader in Susan Rice, ASH, BSI, 2s. ("Beeswing") as part of the Sherlockian movement. You can read what our peers had to say about Susan upon her passing two years ago.
Susan was an exceptional writer, and one of her specialties was Vincent Starrett. We had the opportunity to speak with her and Ray Betzner, BSI ("The Agony Column") about Starrett on Episode 61:
And there could be no better example of Susan's mentorship than her involvement with the Adventuresses of Sherlock Holmes and the quiet yet determined effort to see women admitted to the Baker Street Irregulars, which we discussed with her and Evelyn Herzog, BSI ("The Daintiest Thing Under a Bonnet") in Episode 89:
So when the Susan Rice Mentorship Award was announced at the 2022 BSI Weekend, it was no surprise that stalwart Peter Blau, BSI ("Black Peter") was announced as the inaugural recipient. [That's Peter pictured above with Susan.]
We're happy to say that the accolades will continue annually and that nominations are open until October 31 for the Susan Rice Mentorship Award, which will be announced and presented at the 2023 BSI Weekend. 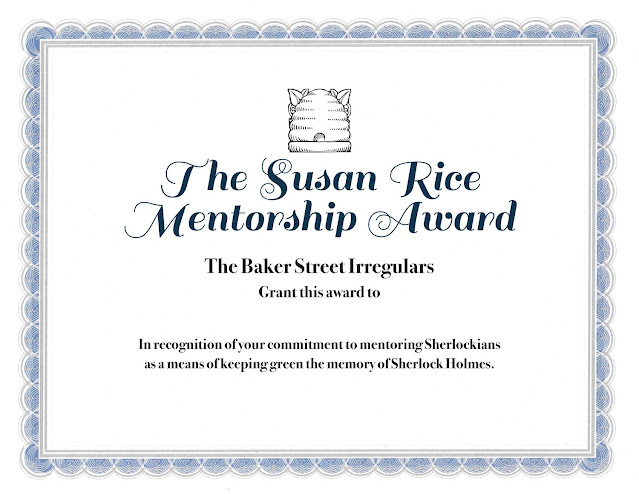 What is the Susan Rice Mentorship Award?

The award is to recognize the activities of a member of the Sherlock Holmes community who has been a mentor to others, in the spirit of Susan Rice. The award will be judged on the mentor’s commitment to bringing aspiring Sherlockians into the cause and encouraging them to find ways to keep green the memory of Sherlock Holmes. While those activities could be in the traditional realm of trifling monographs and playing The Game, we would also recognize that the effort could take place in other media and activities.
To sum up who we are looking for in a few words: Someone who is generous, welcoming, and offers encouragement.

Who Is Eligible For The Award?

The Susan Rice Mentorship Award is open to all living Sherlockians who are generous, welcoming, and offer encouragement. They will also need to have a proven record that supports that definition. No current judges or previous winners may be considered for the award. The award is not limited to members of the Baker Street Irregulars.

How Is Someone Nominated?

The award will be given based on nominations. The nominator should complete an essay of 750 words or fewer that answers this question: “Who do you believe should be recognized for their work in mentoring aspiring Sherlockians and why? Please provide specific examples of their guidance, encouragement, and welcoming spirit.”

Qualities to consider when nominating: Welcoming to all Sherlockians; looking out for new Sherlockians to join the ranks; encouraging involvement and guiding people through their participation; connecting new Sherlockians to current members of the BSI; believing in someone even if they don’t believe in themselves; leaving the organization better than when they joined it.

Should someone be nominated in one year and not win, they would need to be re-nominated for consideration in succeeding years.

Where Should Nominations Be Sent?

Nominations should be sent to SusanRiceMentorAward@gmail.com. An acknowledgment email will be sent in reply.

Who Are The Judges?

The current judges are Curtis Armstrong, Ray Betzner, Jenn Eaker, Ashley Polasek, and Steven Rothman. Again, judges are not eligible for the award.

For a heartfelt reminiscence on Susan Rice's impact from a former mentee of hers, read Curtis Armstrong's essay on the Studies in Starrett blog.

We hope you nominate someone worthy of the award.

[Correction: an earlier version of this misattributed the photo credit. Will Walsh, BSI took the photo.]