“foreigners who get into difficulties” [GREE] 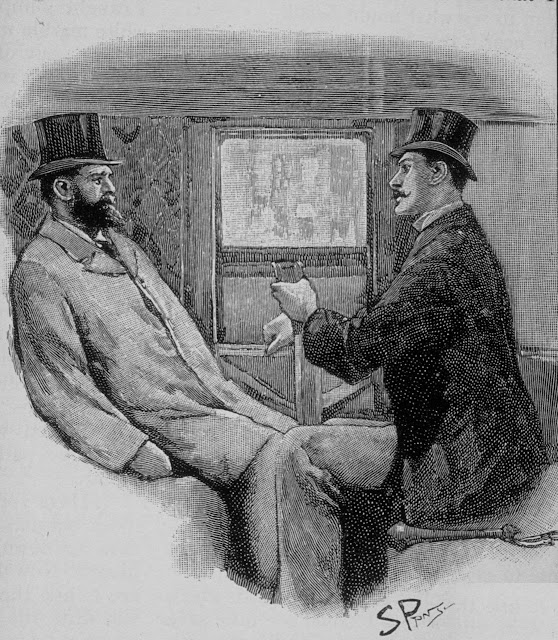 It’s notable that so many of the crimes and criminals investigated by Sherlock Holmes have their roots in other nations. Even if a crime is committed in England, the roots of the evil deed and/or the origins of the evildoer were planted in some foreign land and imported to England.

While a few of the crimes in the Canon are homegrown, relative to the size of the Canon itself, a disproportionate number start elsewhere.

In the very first story, A Study in Scarlet, everything starts in the American West and a major religion, based in the United States, is represented as some sort of criminal conspiracy. The trend is continued in The Sign of the Four as the initial action takes place in India, followed by the Andaman Islands, with the consequences migrating to British shores at a later date.

The first of the short stories, “A Scandal in Bohemia” has two protagonists-cum-antagonists, one of whom is Bohemian and the other from New Jersey.

The list continues throughout the Sherlockian journey. Killer Evans and Abe Slaney are from Chicago. While Neil Gibson might not have committed an actual crime, he is the villain of the story and he’s also American. The criminals in “The Red Circle” and “The Six Napoleons” have their roots in Italy. Russian anarchists are the focus of “The Golden Pince-Nez.”

Even native Englishmen first go abroad to go astray, and then return to home. Grimesby Roylott is an example of this trend.

“a foeman who is worthy of our steel” [HOUN]

Yet, this antipathy towards foreigners, with devilry hatched elsewhere and then foisted upon England, reaches a zenith with the creation of the greatest of canonical villains. Professor James Moriarty, seemingly a native of Great Britain, possessed of an Irish or Anglo-Irish name, is really himself based on a foreigner.

Ben McIntyre, in his excellent book, The Napoleon of Crime tells the story of Adam Worth, master criminal and criminal mastermind. Worth’s exploits were well-known to Conan Doyle, and the term “Napoleon of the criminal world” was first used by Robert Anderson of Scotland Yard. McIntyre describes in considerable detail how Conan Doyle came to model Moriarty after Worth.

While Moriarty at first appears to be something of a homegrown creation, the backstory is consistent with the persistent xenophobia that echoes throughout the stories.

Adam Worth has a seemingly British-enough name. But Adam Worth was not Adam Worth. He was Adam Werth, or perhaps Adam Wirth. Born in Germany to impoverished parents, he was brought to Cambridge, Massachusetts as a small child.

While still a teenager, he had a notorious Civil War career, joining the Union Army in return for an enlistment bounty, deserting, reenlisting under another name for another bounty, etc. At one point, he even deserted the Union and surrendered to Confederate troops in return for yet another payment, and then promptly escaped the South. He eventually became the great criminal of his age, plying his trade on the Continent and in England.

Conan Doyle was aware of this when he created Moriarty. Rather than developing a character de novo, he returned to his basic concept of seeing evil born elsewhere and then traveling and polluting English soil. Edgar Smith, in his early study of Moriarty (The Napoleon of Crime, The Pamphlet House, 1953), suggests that the Professor was born in the West of England. But his true birth was on the Continent and his development into a criminal took place in America.

Conan Doyle maintains this attitude to the end. In “His Last Bow,” our final glimpse of Holmes in action, we find that he traveled to America to establish himself as a criminal, and then returned to England to fight spies who were from yet another foreign nation, Germany.

What then was the basis for this persistent effort to blame so many problems, so many crooks, so many crimes on people or events from abroad?

“the loungers and idlers of the Empire” [STUD]

One explanation comes in the form of “imperial gothic,” a concept put forward by Patrick Brantlinger in Rule of Darkness: British Literature and Imperialism, 1830–1914. Brantlinger argued that many of the late Victorian writers were concerned that civilization, empire, and progress generally had stalled and were at risk of collapse. Conan Doyle, Rider-Haggard, Kipling, Buchan, et al responded with works that share three common views of the wider world.

The first is the idea of regression, that an individual who traveled to the furthest reaches of the Empire would be corrupted by the dangerous ideas to be found there.

One very explicit example of this is Professor Presbury’s monkey-antics which stem from a visit to Prague and the regular importation of a dangerous serum from overseas. Conan Doyle also presents imperial outposts as places where despicable impulse can be indulged, such as James Barclay’s treatment of Henry Wood. This is more a commentary on the lack of law and order on the frontier, rather than threats from overseas specifically.

“the powers of evil are exalted” [HOUN]

The second theme is the invasion of the west by demonic or barbaric forces. This is where imperial gothic really gets gothic and the occult comes to the fore.

Given “no ghosts need apply” in Sherlock Holmes’ world, this theme is more often seen in Conan Doyle wider work, in stories like “The Brown Hand” where a doctor is haunted by an Afghan hillman for his actions in India.

Of course, there are examples in the Canon, everything from the infamous Tonga and the swamp adder to the predatory sexual behavior of Baron Gruner, who is pointedly the “Austrian murderer.” The foreign criminal societies operating in England are themselves examples of barbaric forces, though again principally as threats to law and order.

“persuaded her to fly with him” [GREE]

The third theme is that, as the map of the world is filled in, there are fewer and fewer opportunities for adventure and for people (men) to prove themselves in the modern world.

The evidence for this is much stronger in The Lost World than in Canon but we may see it in the Sherlock Holmes stories in reverse.

The constant invasion of the metropolis by forces from overseas provides these opportunities in so many cases. Perhaps it’s significant that, after his Watson-reported retirement, Holmes has to go to America for a bit of adventure.

All this should be colored by the recognition that often these writers — especially Conan Doyle —  saw empire as a civilizing mission, patronizing and aggrandizing though that was.

In later years, Conan Doyle appears to have lost faith in the empire’s ability to do this and saw spiritualism as an alternative —  a way of connecting all humanity towards a higher purpose.

The allegorical historical short stories in Tales of Long Ago are an overlooked stepping stone on that journey, in that they describe the cyclical nature of empires, and that while Britain’s may rise, it will inevitably fall.

In Rule of Darkness, Brantlinger argued that “the ultimate victory of spiritualism was prefigured for Doyle in the demise of the empires of this world” which may explain why he regarded Tales of Long Ago as his favourite collection of stories.

One wonders if the number of threats specifically from America is an unconscious recognition that the USA would one day supplant Britain as a world power. Conan Doyle was speaking as Holmes when the detective said the children of the future would be “citizens of the same world-wide country under a flag which shall be a quartering of the Union Jack with the Stars and Stripes.” [NOBL]

But perhaps in that quartering there was some anxiety too.

If you enjoyed this essay, you might enjoy the series of discussions on international influences in the Canon we hosted in Season 3 of Trifles: