“the unusual, and even the fantastic” [SPEC] 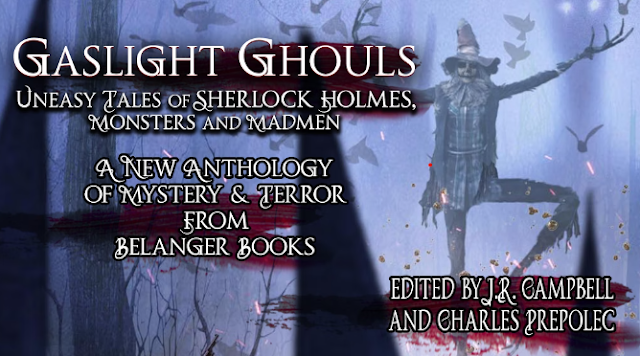 Charles Prepolec, BSI ("The Man with the Twisted Lip") and J.R. Campbell are well known in the Sherlock Holmes and Arthur Conan Doyle community. Their Gaslight series involving Holmes and Watson battling ghosts, demons, and other supernatural creations have been a big hit with both Holmes and horror fans, and their collection Professor Challenger, New Worlds Lost Places was a Doylean dream come true, a collection of short stories starring Doyle's other famous creation, Professor Challenger.


I interviewed the two editors on their thoughts about the great detective, their favorite Holmes performance, and what brought them to writing on the world's first consulting detective. 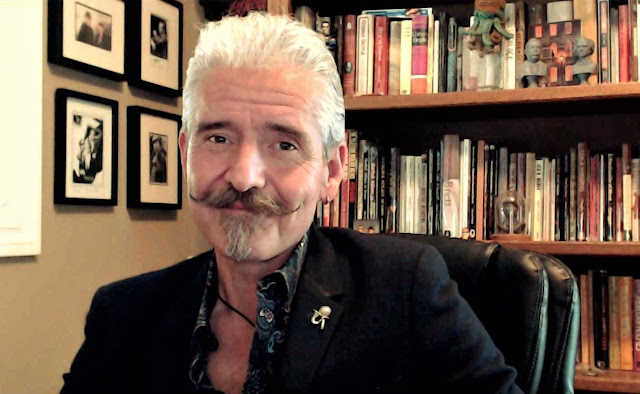 Q: How were you first introduced to Sherlock Holmes?

CP: I’d read The Hound of the Baskervilles when I was about 10 years old and disliked it thoroughly as I found the absence of Holmes for much of it rather unsatisfying. Close to a decade later I found myself picking up The Cases of Sherlock Holmes comics, as I was a fan of the artists (Dan and David Day), and found myself getting into the text, which was entirely ACD’s original text, not adapted. From there it was a short step to buying a copy of The Adventures of Sherlock Holmes and I’ve been hooked ever since.

Q: Do you have a favorite Sherlock Holmes story?

CP: As much as I go on about the short stories being the best, my favorite remains The Sign of Four, the second appearance of Sherlock Holmes. It’s pretty much a perfect late Victorian adventure novel, with romance, flashbacks to exotic locales, creepy and bizarre characters and a more fully-formed version of our hero than the proto-Holmes of A Study in Scarlet. Of the short stories, I rate "The Speckled Band," with all its Gothic-revival elements as one of Doyle’s absolute best, but when push comes to shove, my heart belongs to SIGN.

CP: No. I’ve never written any, ever, but have edited five Sherlock Holmes anthologies and written a good number of published non-fiction pieces. I’m simply not imaginative enough to come up with clever ideas and plots on my own, but am analytical enough to recognize, appreciate and finesse the work of others who do.

Q: What do you feel is the most underappreciated aspect of Holmes?

CP: That he’s as human as the rest of us, with all the idiosyncratic foibles and personality traits, both positive and negative, that go along with being one. There is that moment in "The Norwood Builder" when McFarlane announces he expects to be arrested and Holmes replies “This is really most grati—most interesting” and Watson notes “My companion’s expressive face showed a sympathy which was not, I am afraid, entirely unmixed with satisfaction.”

The mask slips and Holmes’s innate human selfishness stands clearly revealed and we are reminded to take him seriously when he said in "The Red Headed League" that “My life is spent in one long effort to escape from the commonplaces of existence. These little problems help me to do so.”

We forget that he isn’t some super-human altruistic servant of justice, but rather a somewhat too-clever guy who does what he does simply to avoid going mad from boredom, regardless of Watson’s hero-worshipping efforts to convince us otherwise.

Q: Do you have a favorite film/television/theatre actor to play Holmes? What attracted you to the performance?

CP: Peter Cushing usually tops my list. His waspish energy and a certain ever-present intelligence in those piercing blue eyes make for a very convincing Holmes, plus I just love him in most anything. And, given his ‘Hammer Horror’ associations, I can’t imagine a more perfectly representative Holmes for the stories we have in our books.

Q: How did Gaslight Ghouls come about? What is the basic theme for the anthology?

CP: Each book in our ‘Gaslight’ series tends to carry a loose theme beyond the broadly vague tag of ‘horror.’ In previous volumes our general themes have explored the outright fantastic, the nightmarish, the uncanny and the gothic, but this time out we took our thematic cues from Holmes’s comments to Watson in "The Copper Beeches" regarding isolated country houses. Specifically, “…Think of the deeds of hellish cruelty, the hidden wickedness which may go on, year in, year out, in such places, and none the wiser.”

So, what comes to mind when you think of evil and hidden wickedness in lonely places set in rural Britain when looking for a horror theme? Why, folk horror, of course! A subgenre of horror that is currently undergoing something of a revival. As such, we decided on this timely, and with Holmes’s COPP comments, fairly obvious, theme for our latest anthology.

Q: Why do you enjoy having Sherlock Holmes in horror stories?

CP: It’s somehow the most fitting and natural thing in the world for me. The character of Sherlock Holmes was ‘born’ in the same literary crucible that gave us Shelley’s Frankenstein, Stoker’s Dracula, Stevenson’s Jekyll and Hyde, Poe’s body of work, etc… the 19th century gothic revival.

When Conan Doyle began writing in earnest, he wrote weird tales, gothic tales, or more broadly horror tales. I see his creation of Holmes, blatantly redressing Poe’s Dupin, as something of a practical consideration to save him having to create a new character to unravel the threads every time he wrote a weird tale.

Surely a detective-type made more sense than an endless stream of different students, nephews, and other such clever young protagonists to serve the same purpose in populating his ‘horror’ stories. And, frankly, much of the Canon has more in common with 19th century weird fiction than it does with what we call mystery or even detective fiction today.

So, for me, Sherlock Holmes is most interesting when involved in strange, outré, and grotesque horror stories. Plus, it’s just huge fun to play in the Victorian literary monster sandbox. And, in the end, even Watson tells us Holmes “…refused to associate himself with any investigation which did not tend towards the unusual, and even the fantastic.” Who am I to argue with Watson?

Editor's note: we first interviewed Charles about the Gaslight series in 2013 on Episode 57: 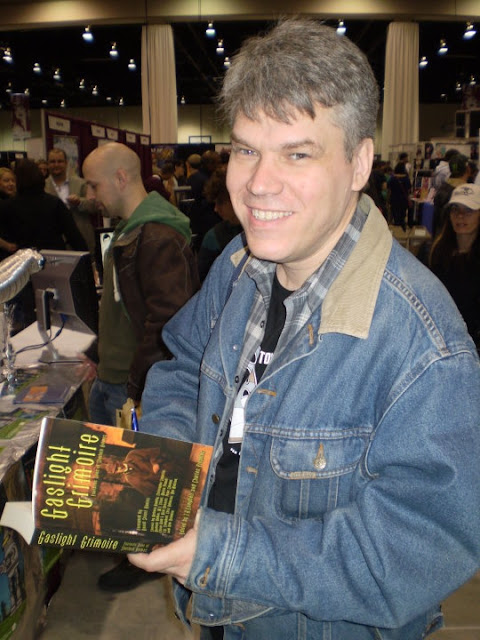 Q: How were you first introduced to Sherlock Holmes?

JRC: There is a phrase, "Everyone thinks they know Sherlock Holmes but they are wrong," and that described me pretty well. I was aware of Sherlock from an early age, I'd seen him here and there, read him a couple of times, and he appeared to me an interesting but rather flat classic detective. It wasn’t until I read through The Adventures of Sherlock Holmes that Holmes became a more rounded, more impactful character. He really is addictive but, for me at least, it wasn't until I had a few of his investigations under my belt that he started to emerge from the shadows.

Q: Do you have a favorite Sherlock Holmes story?

JRC: In general, I prefer the short stories. They add to more than the sum of their parts. My favorite? I’ll go with "Silver Blaze" — it has everything: deductions based not just clues uncovered but on the absence of evidence, some great quotes, and I adore the independence Holmes shows by waiting until after he has cashed in his winnings before presenting the solution to the case.

Q: What do you feel is the most underappreciated aspect of Holmes?

JRC: I’m always fascinated with who Holmes is willing to trust and who he doesn’t. In "The Problem of Thor Bridge" when Gibson denies any wrongdoing, while everyone insists he’s had an improper relationship outside his marriage, Holmes is willing to at least entertain the notion that Gibson is telling the truth.

In "The Blue Carbuncle," when he accepts Ryder’s pledge not to steal again and lets him go. I always expect his prior investigations, the terrible things he has seen, will render him unwilling to trust others but that’s not the case.

Q: Do you have a favorite film/TV/theatre actor to play Holmes? What attracted you to the performance?

JRC: Enjoyed the way the Benedict Cumberbatch portrayed the detective in BBC's Sherlock, the analytical way in he seemed to observe the world as if he were not a part of it. That said, I always enjoyed the Robert Downey Jr. films, presenting a Holmes who was more a part of the world. There were times when Jeremy Brett’s performance was amazing and Basil Rathbone’s voice is often the Holmes voice I hear (even though I know it is not as correct as Brett's was). My guilty pleasure remains the Michael Caine comedy Without a Clue.

Q: How did Gaslight Ghouls come about? What is the basic theme for the anthology?

JRC: Our Gaslight anthologies have always combined Sherlock Holmes and elements of horror fiction, aiming to walk the fine line satisfying purists from both camps. It's a patch of literature that has fascinated both Charles and me for many years. For me, it speaks to the essence of Holmes, the embodiment of the rational, scientific process applying himself to chaotic and irrational problems.

For Ghouls, the inspiration was based firmly in folk horror and, specifically, monsters and madmen. Given the anti-science events of recent years, a dive into non-scientific systems of thought seemed both timely and due for a challenge from the master detective. I was quite pleased with the results, with a number of excellent stories from writers we've worked with before as well as a number of writers we've been hoping to work with for some time.

Q: Why do you enjoy having Sherlock Holmes in horror stories?

JRC: We tend to consider borders of different literary genres as set and unmoving but my experience has been that they shift quite a bit. Certainly I've seen them change during my time, the boundaries have shifted a great deal since Doyle wrote his last story and even farther since he penned his first.

I'm not suggesting that it's wrong to consider the original stories as mysteries, even though many of them carry elements that would be considered outside of the mystery genre today. But I would argue that the canonical stories revel in a certain dread—a particular atmosphere—that the modern mystery genre has left behind.

During Doyle's time, mysteries were morbid and frightening. They were ghastly. Cozy mysteries simply were not a thing when Sherlock arrived on the scene. In order to chase that sensation, which was so delicious in the canonical stories, we've had to ignore some modern genre lines. This has caused some purists to turn up their noses, which is their right.

I'd rather be true to the spirit of the canonical Sherlock Holmes stories than to the rules of modern literary genres which simply did not exist when Holmes stepped onto the page. Naturally, everyone likes what they likes, your mileage may vary, but Doyle's Holmes stories were, to my mind, much more adventures than what we consider mysteries today.

The Sherlock Holmes stories I want to read don't always fit into the mystery-genre shaped hole on my bookshelf, so Charles and I go and dig them out ourselves.

At the turn of the century, he served as news editor for late actor Christopher Lee’s official website. A speaker and frequent contributor to Sherlock Holmes-related non-fiction books, journals, etc… Gaslight Ghouls: New Tales of Sherlock Holmes, Monsters and Madmen (2022) is his first anthology for Belanger Books. He resides with his patient wife, Kris, and a yet more patient cat, in Calgary, AB, Canada. Twitter: @sherlockeditor


Gaslight Ghouls is available on Kickstarter until August, 31st! You can see what the campaign is all about and join others who are backing it.