Month After Month His Papers Accumulated: A Don Redmond Centenary

"The index books, and others perhaps less excusable" [CREE] 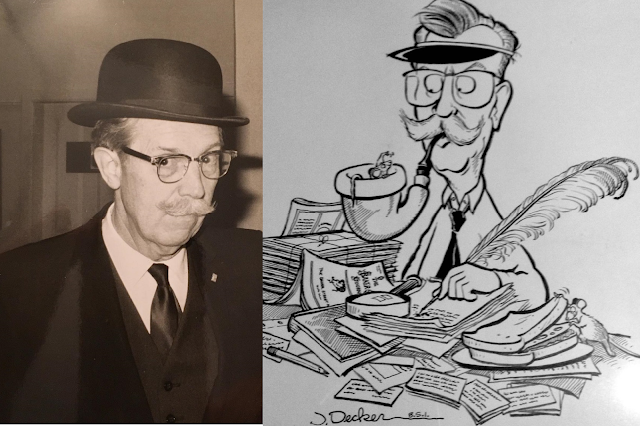 Today, May 19, would have been the 100th birthday of my father, Donald A. Redmond, one of the more prolific Sherlockians of his generation. He is best known in many quarters for his two scholarly books — Sherlock Holmes, a Study in Sources and Sherlock Holmes Among the Pirates — but he wrote much more as well, including articles in Canadian, British and American journals and newsletters over four decades.
I have been working lately to compile a bibliography of his writings, and then assemble an anthology to make some of the gems available to today's Sherlockians. I know I haven't found everything he wrote (and I never will), but there are at least 250 discrete items, from technical research to Sherlockian "grand game" speculation and some fragments of flippant verse:

I suspect of Sherlockians very few
Excepting John Clay (perhaps Merridew)
Can tell at a glance
At the knees of their pants
A tired old limerick from a clerihew.

That one was typewritten on a recycled catalogue card, and never published — just as his essay "The Case of the Builders Bodies", identifying some sources for the plot of "The Norwood Builder", apparently never saw print. Some day maybe it will, along with a sheaf of others.

Shortly after my father's death in 2014, I wrote a summary of his life and Sherlockian career for I Hear of Sherlock Everywhere

A chemistry graduate of Mount Allison University, he went on to study library science at McGill University and the University of Illinois, and worked in library administration in Nova Scotia, Ceylon, Turkey and Kansas (where we both caught the Sherlockian bug) before becoming chief librarian of Queen's University, Kingston, Ontario, 1966-77. Railways, Meccano, and church administration and history were among his enthusiasms in addition to Sherlock Holmes and Arthur Conan Doyle.
He was admitted to the Baker Street Irregulars in 1969, with the title "Good Old Index" in recognition of his work as an indexer. A Two-Shilling Award from the BSI followed.
His first major Sherlockian index, covering The Baker Street Journal from 1946 to 1969, appeared in 1970, and he continued to index the BSJ, with cumulations, until 2012. Other indexes followed, knocked out on a series of manual and then electric typewriters — he never had the slightest desire to touch a computer.
And then there was the Bigelow Index at the Toronto Reference Library, an attempt to index the universe of Sherlockian literature, launched in the 1960s by S. Tupper Bigelow and carried on by my father as a volunteer.
The volume of words he knocked out on those typewriters was immense: those indexes and books, cards for the Bigelow Index, articles, verses, quizzes, and even one or two parodies, not to mention correspondence.
To take just one example, in the late 1990s he was conducting what amounted to a monthly column for the Baker Street Dispatch, a newsletter out of Ohio. One of those columns took its title from a phrase in "The Musgrave Ritual": "Month After Month His Papers Accumulated." In it, my father described a little of his methods of indexing:

"The Sherlockian periodicals flow steadily into the mailbox, and when the in-tray is full, seldom before, I set to with index cards, thesaurus of Sherlockian subjects, and typewriter, to bring some semblance of order out of the Sherlockian Chaos. When the tray has been reduced so that the inward flow will not submerge my desk, I transfer the cards to the Metropolitan Toronto Reference Library (some 160 miles away) and the Sherlockiana itself (themselves?) to the file tray. There it further mellows until it too threatens to overflow, and I reluctantly set about to dispose of it somehow.
"Nominally the disposal is to a filing cabinet, alphabetized almost as arcanely as Jabez Wilson's volume of the Britannica, from Abbots to Architecture and on to the Van Herder Airguns (compare with the V entries in Holmes's own index) and the Whitechapel Gazette and the Wigmore Street Post Office.

"But the filing cabinet is full. It is always full. It always has been full."

So are the bookshelves, he added, especially when he had handfuls of newsletters converted into bound volumes.

"I am not a successor to John Bennett Shaw; I know that what gathers is not a complete collection of Sherlockiana, and I have no interest in its being such. I could not afford to make it complete; the prices attached by dealers to items lacking in this collection could readily be attached to choice items for sale out of Windsor Castle.
"But I think there is an eventual value to this collecting. How few are now and will in future be the collections which reflect, not the outstanding gems of the annals of Sherlock Holmes, but the ceaseless activity, energy and enthusiasm of the almost countless Sherlockian devotees, and societies of devotees, who are actively keeping green the Master's memory.

"There is too a real danger that the wheel will be endlessly re-invented, unless the endless bits of scholarship, the grains of knowledge carried by countless Sherlockian ants, are in some way collected and stored. There will always be a need for collections of papers, and for indexes to them."

I have the filing cabinet now, though the Toronto library has its contents and will someday have all these manuscripts I have been wrangling. The bound volumes, most with "Redmond" at the base of the spine, are on my shelves and elsewhere around the Sherlockian world.
And on this centenary of his birth, I know that many Sherlockians join me in remembering Don Redmond.
--
5/19/2022 07:30:00 AM
blog, BSI, Chris Redmond, Sherlockians