“a small brochure, with the somewhat fantastic title of ‘A Study in Scarlet’” [SIGN] 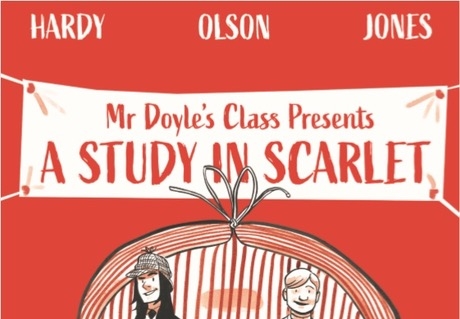 This charming graphic novel aims to present "the original Sherlock Holmes story reimagined for a modern audience," and it succeeds wonderfully.

It's adapted by Matthew Hardy, illustrated by Russell Mark Olson, and published by the Portsmouth City Council, who also maintains the Richard Lancelyn Green collection. The goal is to introduce the novel, originally written in Portsmouth, to readers of all ages.

A group of present-day schoolchildren are learning about A Study in Scarlet. Under Mr. Doyle's direction, they're staging it as a play. Through the magic of imagination, the kids meet the originals, with the incorporation of the classic train car image from "Silver Blaze" in which Sherlock Holmes, in deerstalker and caped coat, explains to Dr. John Watson.

The comic format is used gracefully. The book opens with the modern-dressed kids peering around a Victorian street as snatches of dialogue float by. This illustrates the clash of cultures and times while still putting the reader in the center of the action. The current characters are drawn against classic settings, the blend making the story feel fresh.

The colors are all shades of a soft red. Although monochrome, the variety of tones adds depth to the art. The teacher is used to clarify some artistic choices.

The setting, on the stage, allows for focus on the most famous or most exciting moments, while stepping back, as necessary, to set context. For example, Sherlock Holmes is played by Scarlet Achary. Another student complains that Sherlock Holmes should be a boy, only to be told, "This is a play... Anyone can be anything they want." In a story about imagination, that's a welcome piece of advice.

The Utah section is abbreviated, accompanied by original illustrations, and summed up with the children concluding that anyone who doesn't listen to a woman's wishes is a creep. That's a nice way to highlight the still-relevant messages from this long-ago tale of revenge.

My only complaint is that the lettering is awfully small. Younger readers shouldn't have a problem, though, and it makes for a book comfortably sized for smaller hands.

The book can be ordered from the Portsmouth Museums website, and this review by Leo McBride has included preview art panels. 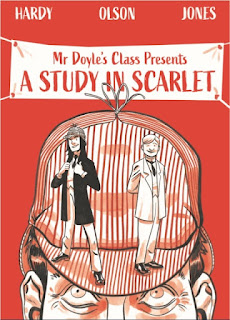