Sherlock Holmes: The Detective Who Will Never Die 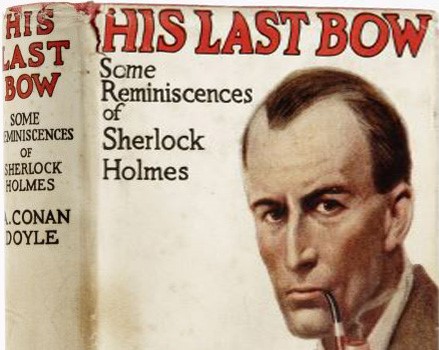 In 1927, when The Case-Book of Sherlock Holmes was published, Sir Arthur Conan Doyle wrote in its preface that "Mr. Sherlock Holmes may become like one of those popular tenors who, having outlived their time, are still tempted to make repeated farewell bows to their indulgent audiences."

Outlived his time, never; but farewell bows, yes indeed, and frequently, in the 60 canonical tales created by Conan Doyle and John H. Watson over a 40-year period. Thus it is no surprise that in one of the later tales, "The Three Garridebs," Watson cheerfully remarks that this adventure "is not the first we have shared, Holmes. I hope it may not be the last."

Indeed it was not. But behold a list of the stories—no fewer than ten of them—that were, in their day, the "last" Sherlock Holmes story:

The original published adventure of Sherlock Holmes, and with no hint that there might ever be a second one, it was last as well as first.

A more sophisticated novel than its predecessor, The Sign of the Four again appeared with no indication that a series was in prospect. Indeed, Watson tells Holmes as the adventure ends that "I fear that it may be the last investigation in which I shall have the chance of studying your methods."

This came as the 24th short story in a quick succession following those two novels. Its title could hardly be clearer as an indication that it was meant to put a period (in British terms, a full stop) to the detective's career. Indeed, Watson describes it as "the last words in which I shall ever record the singular gifts by which my friend Mr. Sherlock Holmes was distinguished".

While this was definitely a new story, it was antedated to avoid the implication that Sherlock Holmes lived again. Doyle said that it was "a reminiscence, not a resurrection" of Holmes. It was definitely a one-off, the 27th story and, for a time, the last.

This was one of the short stories that would soon be collected in The Return of Sherlock Holmes. Nothing in the tale itself suggests that it might become the last adventure, but in "The Second Stain,"  published just a month later (see below), Watson writes that he "had intended" "The Abbey Grange" to be the last "which I should ever communicate to the public."

Coming at the end of The Return, this was a natural stopping-place for a reluctant author. And Conan Doyle prefaces it with an unusually long, and unusually dull, first paragraph in which he explains that Holmes has now retired and "notoriety has become hateful to him." As a result, he says, there will be no more: "this long series of episodes should culminate in the most important international case."

However, money talks, so there were more stories.

"His Last Bow" is the story of Holmes's involvement in espionage before World War I, a later era than is reflected in any of the other canonical stories, and its title — subsequently borrowed for the entire collection in which it appears — strongly suggests that the hero detective would appear on the stage no more.

This tale one of the stories that would be collected in The Case-Book of Sherlock Holmes. Nothing in it actually says that there will be no further tales, but it is set in 1907, at or beyond the end of Holmes's career, and told in Holmes's own voice, rather than that of Watson, because it is set "after my withdrawal to my little Sussex home," when detective and doctor have almost lost contact.

This was in fact the last of the Doyle/Watson tales ever to be published. It is very suitable for that position: a story of degeneration, death, and old bones, whose final words are "old age."

And yet when The Case-Book was compiled and published in 1927, to be followed by The Complete Sherlock Holmes in 1930, "Shoscombe Old Place" no longer stood last.

That honour of the last story, if it can be called such, eventually went to "The Retired Colourman," another 1926 story, and another story about the bleakness of old age. Perhaps the reference to retirement was the reason for placing it last, or perhaps it was the sentence that now stands at the very end of the volume for a reader who goes through the Canon in order: "Some day the true story may be told."

Until it is, The Complete Sherlock Holmes is, like Holmes's own monograph about the polyphonic motets of Lassus, "said by experts to be the last word upon the subject." One might also quote Holmes himself, from "The Norwood Builder":


"You said it was final; and so it was, in a very different sense."


For the stories just keep coming. In 1948, "The Man Who Was Wanted" was published as the 61st canonical tale, and it took a considerable while before evidence surfaced that its author was neither ACD nor Watson but Arthur Whitaker. In 1978, Michael Dibdin wrote a pastiche under the title The Last Sherlock Holmes Story, and in 2004 Michael Chabon produced The Final Solution: A Story of Detection.

But neither book was the end, and the end is not yet in sight. We may hope that it never will be.

[Editor's note: today, February 21 (or 2/21 in U.S. calendar format) would seem to be the perfect day to review Vincent Starrett's iconic poem "221B," which contains the lines "Here dwell together still two men of note / Who never lived and so can never die"]