"...scrambling over your garden wall." [EMPT] 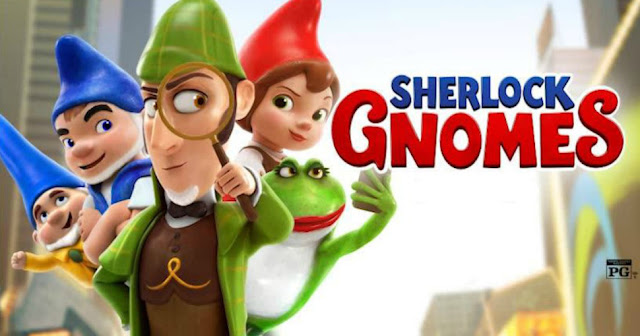 Several years ago (in 2011, to be exact), when my older daughter was a lot smaller, we watched a fairly humorous children's film adaptation of Shakespeare's Romeo and Juliet, entitled Gnomeo and Juliet. I remember how, as a five year-old, she was entertained, and there were enough tongue-in-cheek Shakespeare references to keep me interested as well.

As you can imagine, the “star-crossed lovers” do not take their own lives at the end, as the target audience would likely find such a thing a bit traumatic. Still, the animation was pretty good, the soundtrack was fun, and there was a very entertaining bit with Patrick Stewart as a statue of the Bard himself.

In March 2018, a sequel to Gnomeo and Juliet was released, this time a spoof on Sherlock Holmes: the title of this new gnomish adventure was—you guessed it—Sherlock Gnomes. The film is part sequel, involving the characters of Gnomeo and Juliet in new adventures, but it is also (of course) a spoof of some of our favorite Sherlock Holmes characters. In fact, the film starts out with a funny little bit where a few gnomes argue about which story they’ll tell next (“Game of Gnomes! Or The Gnome Ranger!”).

Sherlock Gnomes (voiced by Johnny Depp) is a garden gnome detective (that is, a detective who happens to be a garden gnome), who is sworn to protect all of London's garden gnomes. He finds himself pitted against his old archenemy, Moriarty: a sort of "Bob's Big Boy" type of pie mascot (don't ask).

Sherlock is a kind of self-absorbed character, who doesn't treat his sidekick Watson with the respect he deserves. Of course, this is a subject that has been explored in other Holmes films and spoofs. (The Holmes/Watson relationship in the Guy Ritchie films, or the spoof Without a Clue, both spring to my mind.)

Their paths cross those of Gnomeo and Juliet, who are attempting to improve the garden of the house they’ve just moved to, when their fellow garden gnomes are abducted by the evil Moriarty. Or are they? Sherlock Gnomes hears of that abduction and many more around London, and…the game is afoot!

Honestly, I found the film pretty entertaining. Depp was not the best Holmes I've ever seen (well...heard), while Chiwetel Ejiofor voices Watson with great subtlety and dignity. There were all kinds of goofy nods towards the Sherlock Holmes canon: Doyle's Doll Museum, Wisteria Lodge Florist Shop, a grating with "221B" on it, while Sherlock and Juliet encounter a "fierce" pug dog, which Mr. Gnomes calls "the Hound owned by the Baskervilles."

One character even delivers the entertaining line, “No ship, Sherlock!” And of course, there's the obligatory deerstalker cap, Inverness cape, and magnifying glass.

In a little homage to the BBC's Sherlock, perhaps, Mr. Gnomes occasionally retreats into a "mind palace" of sorts, with a completely different style of animation for those sequences (it looks like black and white cel animation, although I suspect it is still done mostly with computers). One little animation detail that I thought was odd: Sherlock Gnomes has a tiny little white beard on the tip of his chin! I think this was probably the only bearded Holmes I’ve ever seen on film. Not that a beard that small is really deserving of the name...

The animation is quite high quality, and the aforementioned "mind palace" sequences were bizarre and fun. The story is packed with enough action and silly humor to keep children entertained, while there are enough pop culture references sprinkled throughout to keep adults from being completely bored.

As mentioned above, Sherlockians will no doubt be amused by canonical references here and there. The plot as a few fun little twists, so the movie isn’t as predictable as some animated feautres can be. As a Holmes fan, I found it enjoyable enough, if not incredibly brilliant. The film only received a 28% on film review aggregator Rotten Tomatoes, but I've seen much poorer films with higher scores.

If you have young children, you could do a lot worse. Or if you’d simply like to indulge in 90 minutes of innocent fun, it’s worth a few laughs. Oh, and did I mention that most of the soundtrack is made up of Elton John songs? (One of the film companies that produced the film was founded by Elton John, so it’s no surprise.)

I would give the film 4 Calabash Pipes on a 5-Pipe scale.