"Compound of the Busy Bee and Excelsior" [CREE] 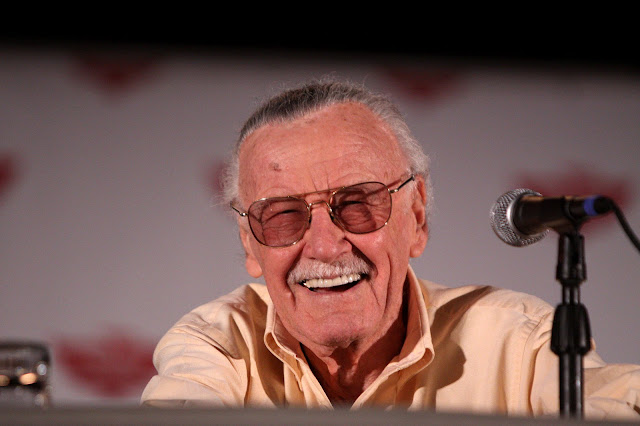 You're probably familiar with Stan Lee's work, as the Marvel universe continues to have its day in the sun. Lee is probably most famous for creating Spider-Man, but he's behind other Marvel wonders such as the Incredible Hulk, the Fantastic Four, X-Men and more.

Stan Lee, the creator who made True Believers of us all, died yesterday at the age of 95.

In an article in the Wall Street Journal, "Stan Lee, Comic Superhero" (possible paywall), Lee talked about his life as part of a promotional tour for his latest comic book Amazing Fantastic Incredible

— which is actually his biography.

He talked about his childhood, in which he loved to read. This excerpt particularly struck us:


"One of his favorite presents was a bookstand he could keep on the table so that he could read during dinner. He was especially inspired by Sherlock Holmes."


How fascinating! It made us want to dig a little deeper and determine where there might have been some overlap in the Marvel universe and Sherlock Holmes. We're not comic book experts, so we may need your help on this one, True Believers.

The first obvious stop was the Marvel Preview two-part feature of The Hound of the Baskervilles, published in 1976. 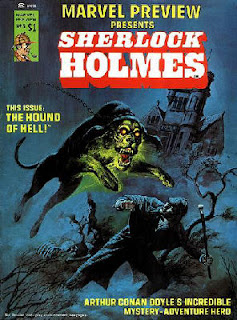 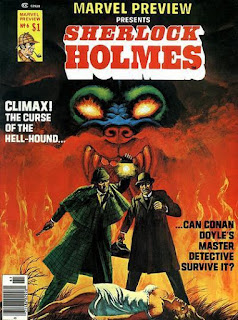 Then, of course we turned to our old friend Jerry Margolin, the sine qua non of Sherlockian art collectors, has some original Sherlockian artwork of Will Eisner. Stan Lee was the 1994 recipient of the Will Eisner award. But more importantly, Jerry (who was our guest on Episode 16) has this image of Spider-Man in a deerstalker and Inverness cape: 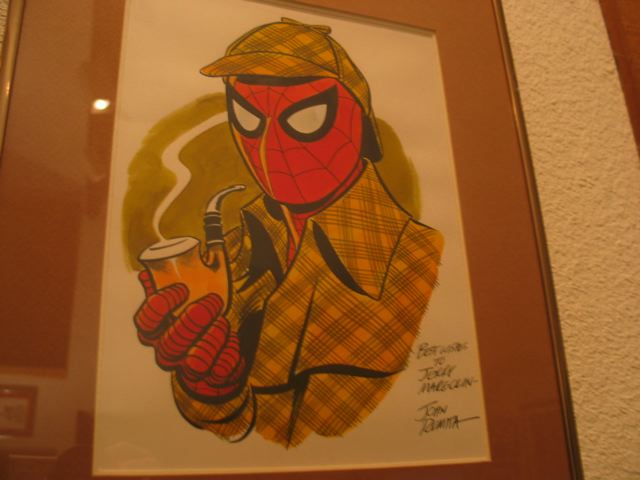 Now we turn to Sherlock Holmes impersonators. In doing so we find that Robert Downey, Jr. has played Tony Stark (aka Iron Man) in a number of Marvel films and Benedict Cumberbatch appeared as Dr. Strange.

And our final connection is a trifling one, but as Sherlock Holmes said, "there is nothing so important as trifles." [TWIS]  In his monthly column in the 1960s, Lee would sign off with his trademark motto, "Excelsior!" While it is also the New York State motto, we can't deny that the phrase also made its way into the Canon in "The Adventure of the Creeping Man," with this exchange between Holmes and Watson, respectively:


Have you the effrontery necessary to put it through?"
"We can but try."
"Excellent, Watson! Compound of the Busy Bee and Excelsior. We can but try - the motto of the firm. A friendly native will surely guide us."

Have we missed any Marvel references that may provide more clues to Stan Lee's early inspiration? Do let us know in the comments section.