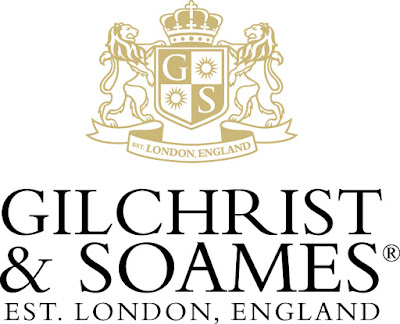 We've previously written about the curse of being a Sherlockian. You do indeed hear of Sherlock everywhere when you've become intimately familiar with the Canon.

When we travel (and that's more often than we care to admit), we're very appreciative of high quality hotel bathroom amenities — that is: soaps, shampoos, and the like. And one of our favorite brands is Gilchrist & Soames. Its very name and branding make it occupy the same space in our mind as Crabtree and Evelyn.

Both have an air of English heritage about them: the name, the packaging, the stores, and the steeped-in-tradition Victorian/Edwardian inferences; they're "quintessentially British." [This is despite the fact that Crabtree and Evelyn began as The Soapbox in the 1970s in another Cambridge: Cambridge, Massachusetts.]

But Gilchrist & Soames is a little more authentic, tracing its roots to London (also in the mid-1970s). The name, the logo that bears a passing resemblance to a Royal Warrant, and various lines of amenities (English Spa, English Garden, London Collection) all point to this place of origin, even though the company is headquartered in Plainfield, Indiana.

But is there more to the story? We think we've found the answer.

"the nervous tutor, the careless servant, and the three enterprising students" [3STU]

"The Adventure of the Three Students" is a story that is particularly dear to us. First published in June of 1904, it took place "In the year '95," making it one of those iconic stories that cemented the time and place of Sherlock Holmes as "always 1895."

The manuscript of this story is owned by The Speckled Band of Boston, a group which we've been a member of since 1992, and we've had the opportunity to see it in person at the Houghton Library at Harvard University. It doesn't hurt that we spent countless hours listening to the Robert Hardy-narrated version and the BBC Radio version written by Bert Coules.

With such familiarity, it's no surprise that we should recognize names and places in our travels. As a fan of Sherlock Holmes, you're way ahead of us on this one, but we'll be explicit. Holmes and Watson were visiting "one of our great University towns" (we can debate the merits of Oxford versus Cambridge another time), residing "in furnished lodgings close to the library," when Watson tells us:


"Here it was that one evening we received a visit from an acquaintance, Mr. Hilton Soames, tutor and lecturer at the College of St. Luke’s."

Hmm. "Soames," you say? A rather unusual name. But not so unusual; Conan Doyle used it in the in "The Adventure of the Priory School" in January 1904:


"The Priory is, without exception, the best and most select preparatory school in England. Lord Leverstoke, the Earl of Blackwater, Sir Cathcart Soames—they all have entrusted their sons to me."

But then we come across the three students for which the story is named: Miles McLaren, Doulat Ras, and Gilchrist.

That's right. The student is Gilchrist and the tutor is Soames. Based in England, where our eponymous amenities supplier was founded.

Is it possible that Anthony and Michael Karger, the original founders of Gilchrist & Soames, were closet Sherlockians? Or perhaps they were influenced by the stories at some point in their lives, and this was a nod — subtle or otherwise — to a classic English tale and classic English names?

It's certainly possible. Is it probable? Well, Holmes himself said,


"When you have eliminated the impossible, whatever remains, however improbable, must be the truth."

We think it's quite probable that the brand Gilchrist & Soames was inspired by the Sherlock Holmes stories. We're delighted to think that two of our favorites are intertwined.

If they're not, we don't want to know about it. 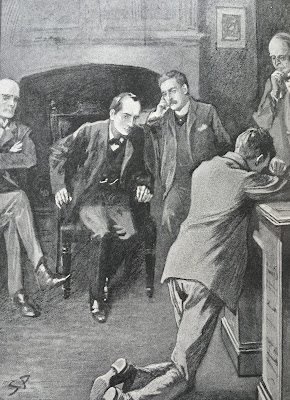